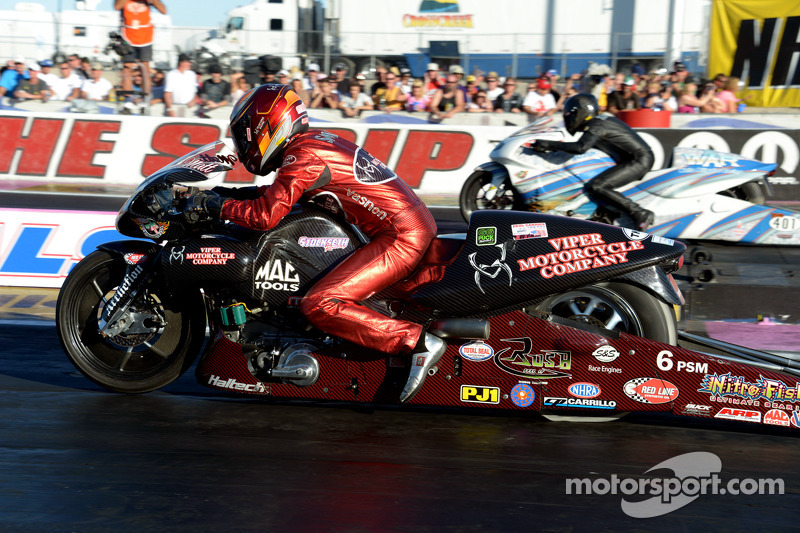 Smith enters this weekend’s eighth annual Summit Racing Equipment NHRA Nationals at Summit Racing Equipment Motorsports Park fifth in the points standings with one final round berth and one semifinal appearance, exactly how he entered this race a season ago. If the next step holds true, Smith could once again be smiling over Fourth of July weekend.

Smith won his first race of the season, jumpstarted his championship chase and earned his second victory in Norwalk in 2013. A year later, Smith certainly wouldn’t mind repeating the process.

“This is a track where we can certainly win again,” Smith said. “The track is good and I love the facility. We could definitely have someone on our team win the race. We have a strong team and we’ve showed that all year. It’s been a pretty impressive performance out of our team. We’ve got a good team and good power, but we have to get some lucky breaks.” 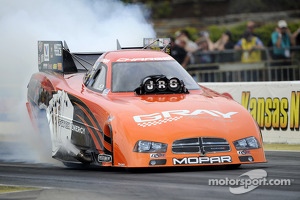 Khalid alBalooshi (Top Fuel), Johnny Gray (Funny Car) and Mike Edwards (Pro Stock) were also last year’s winners of the event that will once again be televised on ESPN2.

The event marks the seventh of 16 races in PSM and the first portion of the season has featured a strong start for Smith’s four-bike team that also includes wife Angie Smith, John Hall and Scotty Pollacheck. All four are currently in the top 10 and Angie Smith earned her first professional victory two weeks ago in Epping, N.H., beating Matt Smith in the final round.

Matt Smith has been consistent on his Matt Smith Racing/Stockseth Racing Buell, but he knows the real work is just beginning. Norwalk marks the third consecutive race weekend and the Mello Yello Countdown to the Championship also looms in the not too distant future.

“We’ve got four more races to show well to get all four bikes in the top 10,” Smith said. “Right now it’s like a chess match and you’re trying to make all of the right moves. We’re looking for wins just like everybody else. Last year John won in Epping and I won in Norwalk. This year Angie won in Epping and it would be great if I could win again in Norwalk. It would be something to get two out of three wins again in this three-race stretch.”

While happy with the team’s start, Smith is by no means satisfied. He lamented his own second-round exit last weekend in Chicago, as well as semifinal losses by Pollacheck and his wife.

“It eats at me,” Smith said. “It was one of those deals where we should have had three bikes in the semifinals and it should have been Angie and myself racing for a finals berth. I’m not sure what happened. I studied for hours just trying to figure it out.”

Smith’s track record, which includes two world championships and 17 career victories, indicates he will solve the issue sooner rather than later. It could come this weekend in Norwalk, where he will face off against the likes of points leader Andrew Hines, who has two wins, and his teammate Eddie Krawiec, who has one victory and is second in points.

Other challengers include Michael Ray, Hector Arana and Hector Arana Jr., who won last weekend in Chicago. But Smith knows what it takes to succeed in crucial moments and he’s banking on that expertise for Norwalk and beyond.

“You have to win first round,” Smith said. “That’s the critical thing in this deal and in trying to get all four bikes in the Countdown. We just have to continue to do a good job, and we’ve got some new stuff that we’re working on that will hopefully be ready for the Countdown as well.”

Khalid alBalooshi defeated Doug Kalitta in the final a year ago and started 2014 with a victory. Kalitta has been red-hot since then, advancing to six final rounds and taking over the points lead. Other top challengers in the ultra-competitive class include Spencer Massey, Tony Schumacher, Antron Brown, who won last weekend in Chicago, reigning world champion Shawn Langdon, reigning Auto Club of Southern California Road the Future Award winner Brittany Force, Richie Crampton, J.R. Todd and Steve Torrence.

With Johnny Gray having retired at the end of last season, the Funny Car field is wide open in Norwalk. Points leader Robert Hight has never won at Summit Racing Equipment Motorsports Park but is seeking a fifth win in 2014. To get it he will have to get past a talented field featuring the likes of previous Norwalk winners Jack Beckman, Tony Pedregon and Tim Wilkerson, as well as Cruz Pedregon, reigning world champion John Force, Courtney Force, Ron Capps, Chicago winner Matt Hagan and Tommy Johnson Jr.

Greg Anderson is tied for the winningest Pro Stock driver in the history of Summit Racing Equipment Motorsports Park and will be looking for his third win. Vincent Nobile also has two victories at Norwalk and is looking for his first of the season as everyone is chasing points leader Erica Enders-Stevens, who has three victories in 2014. Reigning world champ Jeg Coughlin, Allen Johnson, Shane Gray, Dave Connolly, Jason Line and Chris McGaha are also drivers who will be challenging for the win in the 200-mph factory hot rod class.