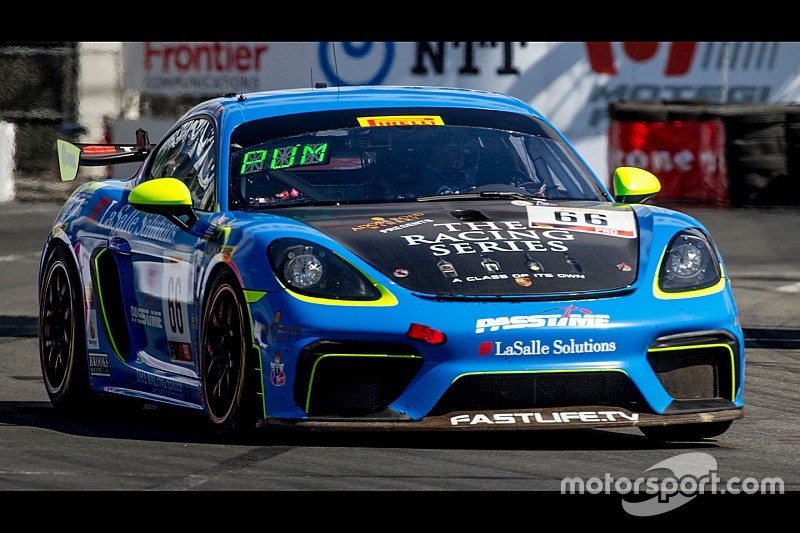 From seventh on the grid, Michael Cooper made a brilliant start in the Blackdog SpeedShop McLaren 570S, passing cars on the front straight, around the fountain turn and into the final hairpin, so that he ended the opening lap third behind Pumpelly’s Porsche and James’ Panoz.

In the opening laps, Matt Keegan ran fourth in the second Panoz ahead of Nicolai Elghanayan’s KTM X-bow who was in battle with Shane Lewis’s Chevrolet Camaro. Jarett Andretti, who had qualified fifth in the Andretti Autosport McLaren, fell back to 10th, nudging the Turn 1 tires at the start of the second lap.

On the restart, Elghanayan was feeling the pressure from Lewis and under braking he skated straight on into the tires at Turn 1. He reversed and rejoined with his car looking like rolling debris at the front, but not before the full-course caution flew.

The next restart, with 24 minutes to go, came at the end of the 13th lap, and the order among the frontrunners remained static, with Matt Brabham now sixth in CRP Racing previous-gen Porsche Cayman.

Lewis outbraked Keegan for fourth at Turn 1 on Lap 16, but the Panoz stayed attached to the Camaro’s rear bumper, and Brabham moved into the frame, despite his relative lack of horsepower.

But when Keegan repassed Lewis, and Brabham tried to follow through at Turn 8 and failed, quickly James Sofronas in the GMG Racing Audi R8 and Andretti’s McLaren were able to take advantage of his lost momentum and moved up to sixth and seventh respectively.

Up front, with 10mins to go, Pumpelly was 1.4sec clear of James, who had a 2.2sec margin over Cooper’s McLaren. In the closing stages, the Pirellis on Lewis’s Camaro started to fade, and he was bottling up Sofronas and Andretti, and allowing Brabham to stay in touch.

Sofronas tried to take the inside line and pass Lewis into Turn 9 on Lap 23, with six minutes to go, but Lewis hung on around the outside which gave him the inside for Turn 10, and he retained fourth.

The battle at the front closed right up when Pumpelly encountered lapped traffic in the twisty section of the track, but Pumpelly remained unflustered and James wasn’t overaggressive. They passed the checkered flag 0.687sec apart.

Cooper was left six seconds further back, while Keegan’s fourth place overall earned him the win in the Amateur category. Lewis’ Camaro clinched fifth ahead of Sofronas and Andretti (second of the Amateurs).