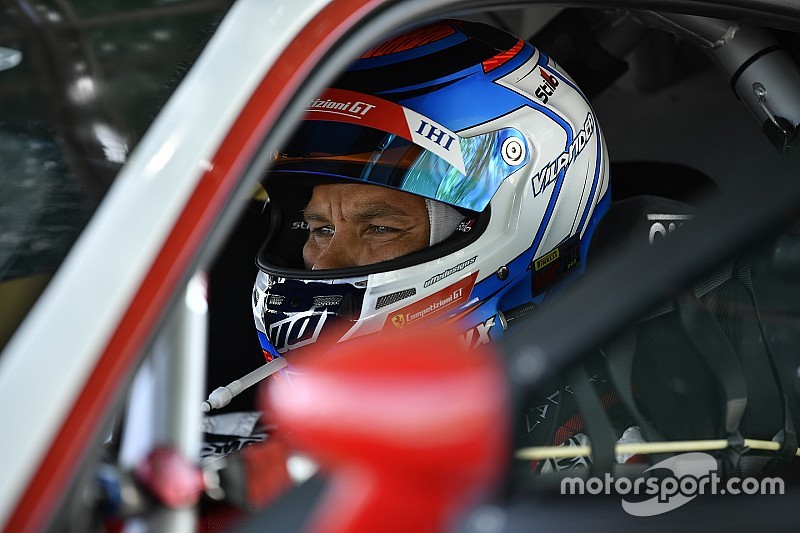 Miguel Molina and Toni Vilander won the second Pirelli World Challenge GT race at the Utah Grand Prix, sealing the SprintX title in the process in their R.Ferri Ferrari 488.

There was drama before the start, as the pole-winning – but technically-plagued – K-PAX Bentley couldn’t take its place on the starting grid, after being forced to plug-in a laptop on the pre-grid, which is against the rules.

That allowed Mike Skeen’s Lone Star Racing Mercedes to lead unchallenged from the start, with Molina taking second ahead of Jeff Segal’s TR3 Ferrari 488, while the second Bentley of Maxime Soulet was spun around at Turn 1 by Alessandro Bressan’s Lamborghini Huracan.

Scott Hargrove muscled Spencer Pumpelly off the track to grab fourth in an all-Porsche 911 battle. But Hargrove suddenly slowed 12 minutes into the race, due to a badly slipping clutch, and was forced to lap some 12s off the pace thereafter. That promoted Pumpelly back to fourth, ahead of Ryan Dalziel’s Audi and Matt Brabham’s Mercedes.

Skeen held a 2.5s lead over the Ferrari when he headed to the pits to hand over to Scott Heckert. Vilander took over from Molina a lap later – sealing their championship win at half distance – and rejoined just ahead of Heckert thanks to running a well-executed overcut strategy.

Heckert staying within a second of Vilander for a while, but never got close enough to attempt a passive move, and the Finn pulled clear by 3s in the closing laps.

“We kept fighting the whole season,” said Vilander. “I’ve been lucky enough to win in Europe and now this is the first title in the US.”

Molina added: “It’s been an amazing experience, it’s been my first year here in America, and I have to thank Toni and the team, they’ve been amazing with me. We can be really happy today, and I’ve done everything I can to help Toni to win the overall title.”

Michael Christensen brought the Porsche started by Pumpelly home third, ahead of the delayed Bentleys of Soulet/Baptista and Soucek/Parente.

Wei Lu finished sixth in the Segal-started Ferrari to claim Pro-Am honours, but Parker Chase and Ryan Dalziel won the Pro-Am SprintX title for TruSpeed AutoSport in their Audi.

Ceaser Bacarella and Martin Fuentes won the Am title with another win in their Scuderia Corsa Garage Italia Ferrari 488.