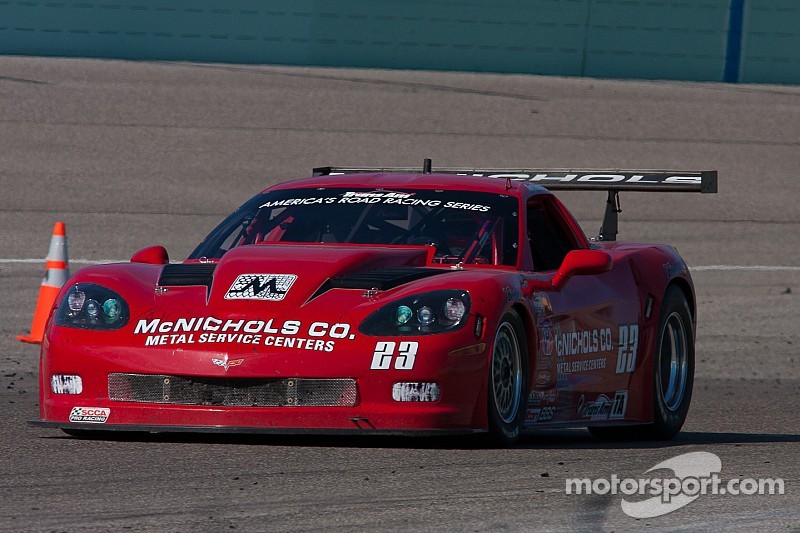 Cameron Lawrence secured the 2014 TA2 Championship from behind the wheel of the No. 1 Ctek/NorthStar Battery/ TI Automotive Dodge Challenger with a victory at Daytona International Speedway, successfully repeating as TA2 Champion. Amy Ruman won the overall victory.

The victory gives Dodge its first-ever driver’s Championship in Trans Am—remarkable given the heritage and history of the Series and the make.

“I’m so happy for Dodge,” said Lawrence. “I’m incredibly lucky to be in this position working with a great team with a great car and all the people who have made this happen. I’m looking forward to keeping this going and seeing where it all takes us. It’s remarkable how close this Championship ended up being; we entered the weekend only a point ahead. We just took care of business all weekend long; the team worked so incredibly hard to give me the perfect car for the race—everyone deserves this, Miller Racing and Dodge.”

“I think as long as we keep doing our job and taking care of business we’ll do well in TA2, but it’s definitely not easy,” said Lawrence. “It takes a lot of work to put something like this together, especially two years in a row; the competition is getting better and better. Adam Andretti put the pressure on us all year long; he’s a great driver with a great crew. In the end we just had a little bit more.”

The win marked Lawrence’s seventh of the year, ending the season with 310 points, 21 more than runner up Adam Andretti and the No. 44 Engineered Components Chevrolet Camaro.

The race also saw the year end on a high note for Amy Ruman and the No. 23 McNichols Company Chevrolet Corvette, as Ruman emerged victorious overall and for the TA class, her second victory on the year.

“Winning at Daytona is everyone’s dream in the racing world,” said Ruman. “We’re pretty excited that the McNichols 23 ran so well today; we were strong all week here and I’m happy to finish on a high note. We’ve been on that edge of poles and wins all season long and in the end a few bad races kept us out of the Championship but we’re happy for the victory today and we’ll come back stronger than ever next year.” Ruman began the race alongside the No. 87 3Dimensional.com Chevrolet Corvette of 2014 TA Champion Doug Peterson who was on pole while Paul Fix, in the No. 4 StopFlex.com/Tony Ave Racing Chevrolet Corvette, began in third.

Once the green flag flew Ruman immediately shot out to the lead as the No. 87 was slow out of the gate. The No. 59 Derhaag Motorsports Chevrolet Corvette of Simon Gregg followed closely moving up from fourth position to second, as both Ruman and Gregg worked to get the better of each other in a race not only for a victory at Daytona but second position in the 2014 Championship.

In TA2, Lawrence began the race on pole with Andretti alongside, and Tommy Kendall, in the No. 11 Ctek/NorthStar Battery/ TI Automotive Dodge Challenger. in third. Once the TA2 field took to the green, it was Ron Keith, in the No. 25 Offsite Image Management Ford Mustang, who made an early charge, overtaking Tommy Kendall and pursuing Andretti immediately.

However, it was on the fourth lap that Kendall made a move of his own, overtaking both Keith and Andretti and claiming second position for himself. Kendall held that position for four laps around the Daytona road course as the Dodge Challenger ran one-two, but fell victim to a flat left front tire forcing the four-time Champion to pit for a replacement. Andretti moved up to second once more, followed by a charging Steve Kent, Jr., in the No. 07 BC Race Cars Chevrolet Camaro, and the 20-year-old Bobby Kennedy, in the No. 88 Gary Yeoman’s Ford/ Bemco Ford Mustang.

The race then went under a full course yellow on lap 12 after the No. 4 of Paul Fix was reported off course and smoking in an unsafe position.

The race restarted on lap 16 to the tune of extremely heavy traffic, but Ruman once more worked on rebuilding her lead, but Gregg remained in hot pursuit with A.J. Henriksen, in the No. 74 Engineered Components Chevrolet Corvette, in third position.

In TA2, Lawrence and Andretti retained their positions, but the deck was shuffled once more as Wally Dallenbach, Jr., in the No. 12 IOA Insurance Chevrolet Camaro, moved up four positions on the restart to third in just over a lap. Then disaster struck for Andretti as the No. 44, then running second, suffered a flat tire forcing them into the pits and effectively out of the 2014 Championship.

Dallenbach on the podium

Dallenbach would move up to second followed by Kent and the No. 88 of Kennedy, until Kent was forced into the pits as well, leaving Lawrence, Dallenbach and Kennedy running in the top three, in that order, and unchanged until the final lap of the race when Kennedy managed to overtake Dallenbach for second with the checkered flag looming.

Amy Ruman held off Simon Gregg for the TA victory, crossing the finish line with a .598 second gap on Gregg, while A.J. Henriksen would finish third in his first-ever TA class appearance, edging Claudio Burtin, in the No. 7 Foametix/MTI Chevrolet Corvette, who finished fourth and Allan Lewis, in the No. 15 BC Race Cars Chevrolet Corvette, who finished fifth.

TA3 was the site of another set of tightly contested races, including a Championship charge by Jason Berkeley and the No. 67 BMG Management Chevrolet Corvette in the International Group.

Martin would lead 28 laps in the race for the American Muscle Group, while 2014 Champion Ernie Francis, Jr., in the No. 9 Breathless Performance Chevrolet Camaro, and Todd Napieralski, in the No. 39 Tremec/SKF/Backstreet Performance Chevrolet Camaro, battled back and forth for much of the race, with Napieralski jumping to an early lead before Francis regained second nine laps in. Francis would overtake Martin on the final lap of the race for the victory as the No. 52 began experiencing mechanical issues, but managed to hold on for a second place finish while Napieralski finished third.

“Our season started with ups and downs,” said Francis. “But the crew has had the car running in absolutely pristine form these past few races. While it was a relief to clinch the Championship at VIR, it was a nice to pick up a victory for Breathless Performance here at Daytona. It’s unfortunate Dean had car issues, but it’s a victory that we’ll gladly take.”

Mike Geldart, in the No. 45 Driving4Education/Hoosier/Phoenix Performance Ford Mustang, would finish fourth in American Muscle, while Rob Bodle, in the No. 16 Caribbean Food Delights/Spec Clutch Ford Mustang, finished fifth.

Saunders led the first seven laps of the International Group’s race, but Russ Snow in the No. 20 Carbotech Chevrolet Corvette was quick off the line, moving up from fourth to second in the first two laps. The effort saw him overtake David Mazyck, driving the No. 71 Archer Racing/Racekeeper/ Team TK Dodge Viper, who started second and Berkeley, who started third.

Snow would move up to first on lap eight, a position he would retain for the remainder of the race; meanwhile Berkeley maintained a more patient approach, knowing he needed to only finish ahead of Norm Betts and the No. 82 Hoosier/VP Fuels Chevrolet Corvette. The International Group would finish with Snow in first, Saunders second and Mazyck third, but it was Berkeley who captured the International Group Championship.

“I just have to thank my team for helping me do what it took to win,” said Berkeley. “I’ve had a great season and a lot of fun this year, and we’re really looking forward to defending this Championship in 2015. It takes a team to make this happen, and they’ve worked so hard to bring this home, I’m so grateful and proud of everyone.”

Amy Ruman’s victory saw her fall just short of Gregg and the second place spot in the 2014 TA Championship, with 268 points to Gregg’s 269 as she remained third on the year end podium. Kerry Hitt and the No. 19 Advanced Composite Products Inc. Chevrolet Corvette finished the year fourth with 202 points in the TA standings while Cliff Ebben finished fifth with 196. Doug Peterson topped the TA Championship points at 302, having clinched the title at VIR one round beforehand.

The TA2 year end points saw Lawrence lead with 310, Andretti in second with 289, Ron Keith in third with 228, gaining position by tiebreakers on victories, Kevin Poitras in fourth with 228 and Bob Stretch in fifth with 184.

The American Muscle Group of TA3 ended the year with Francis atop with 316 points, Chuck Cassaro in second with 266, and Todd Napieralski in third with 262. Rob Bodle would finish fourth with 192, and Fernando Seferlis finished fifth with 107.

TA3’s International Group’s year-end top three were as follows: Jason Berkeley with 201 points, Norman Betts with 195 and Russ Snow with 187.

The 50-car entry was the largest in Trans Am history at Daytona, a fitting end to yet another year of growth and momentum for the Trans Am Series.

Trans-Am finale this weekend at Daytona

Shane Lewis set for Trans Am season with 74 Ranch Racing