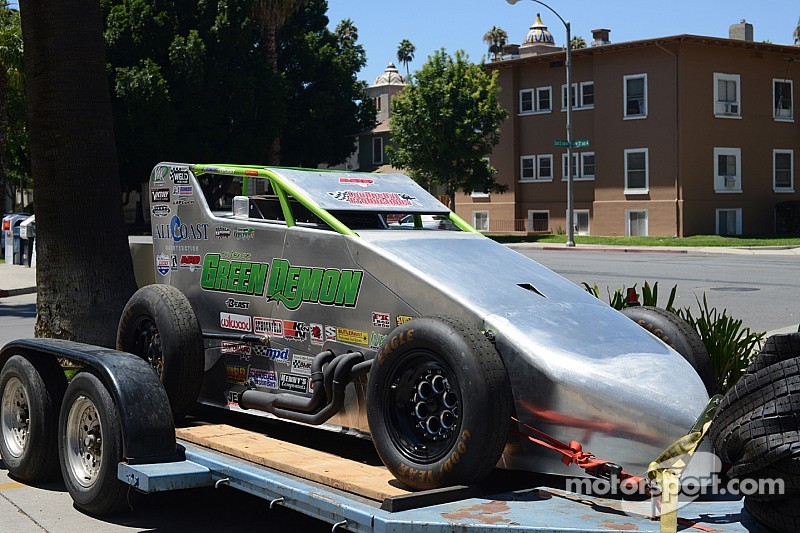 Damion Gardner is a USAC non-wing sprint car racer and has his sights set on Bonneville...yes, Bonneville.

But that wasn’t enough for Californian Gardner, who in 2013 took his 90-inch wheelbase Green Demon USAC-legal sprint car to the Bonneville salt flats in an attempt to become the World’s Fastest Sprint Car. When he wasn’t driving sideways on the salt’s five-mile dragstrip, Gardner managed a top speed of 193.27 mph - and a desire to return and join the exclusive 200-mph club.

While at Bonneville Speedway last year, Gardner was told to lengthen his chassis, add bodywork and perform various engine changes to effect more speed. He reciprocated by adjusting the bodywork for aerodynamics, working on his two-speed direct transmission and, with engine builder Ron Shaver of Shaver Engine Specialties (Torrance, CA) made amendments to the 410-cubic inch V8 that makes around 900 horsepower - all in the name of drivability. But change the chassis? Heck no, that would change the goal.

Gardner returned to the salt this August for SCTA’s Speed Week but was unable to attempt any 200-mph pass as a steady group of storm systems had the salt surface besieged by water, forcing cancellation of the annual paean to speed and sending Gardner, together with the maybe 100 hardy racers that made the trip back home to wait out the weather.

This week’s meeting, from September 6-9 is Gardner’s latest try. He raced - and won - at Santa Maria Saturday night and then drove through to daylight to race the salt. That’s dedication!

Gardner is using a regulation USAC pavement sprint car with just a few aero tweaks like a different nose and sleeker body. And he needs every bit of traction he can get: “If I were to imagine the slickest dirt track I’ve ever been on, it (the salt) would be worse than that. I just didn’t know how slick it was; that was the biggest thing,” he recalled.

For his first, 2013 try Gardner did little to either his Shaver-built engine or to his chassis, other than calming the fuel injection to be able to use all those 900 horses for his benefit. He did play a bit with his gearing for the lower forward speed that gets him underway from a push. “You control [these cars] with the throttle and we’re trying to take some of that out so we can drive it more with the steering wheel.”

Gardner was hoping he can reach wide open throttle (WOT) without constantly spinning, as he did in 2013. And spinning on his first trips through the traps, he’s working on controlling his revs on the engine and making the suspension work to his advantage. “The wheels are always kind of spinning and you’re pedaling it,” he explained.

“It gets my attention usually around 175 mph, but a lot depends on the salt.” Last year he arrived late and the salt was pretty much degraded by that time. This year he’s arriving only a single day late for the, the sun is shining and Gardner is hoping he can make the pass that puts him in that exclusive club of drivers that have made their 200-mph mark.

On Sunday, September 7, Gardner did his first shakedown run (it takes time to go through tech and prep for the salt). The Green Demon hit an exit speed at the end of five miles at 190.656-mph, which showed him the changes made were right and proper. After prepping for a second Sunday run, Gardner noticed a broken left rear torsion bar link and opted for repairs.

On Monday he hit the jackpot with two runs over the magic 200-mph mark. On his second pass through the five-mile traps, Gardner hit an exit speed (after the five-mile drag race) of 202.38426 - but he wanted more. Some light rain followed, accompanied by wicked crosswinds, but Gardner was undeterred. He then went out for a third run hitting 205.47318 mph. Instead of packing up the car and heading back home after a magical Monday, Tuesday morning Gardner improved on his first run of the day at 211.58844 mph.

Will he go faster or be satisfied with the new record he’s set? Bet he returns for the World Finals and a chance to hit 220 mph. But first, it’s time to shoot for that 11th USAC/CRA Sprint Car victory of the year this Saturday at Perris.