Watkins Glen, NY – After starting from pole and briefly losing the lead, Robert La Rocca got around Wyatt Gooden and fended off Gooden on a restart, with the two cars making contact coming to the green and white flags. La Rocca would go onto take his 10th win of the 2012 F2000 Championship season, breaking the existing win record with a bit of drama. La Rocca had already locked up the Championship prior to the race, adding even more points for the pole, and yet another win. Niki Coello finished second while Gooden hung on for third with a damaged car on the last lap. 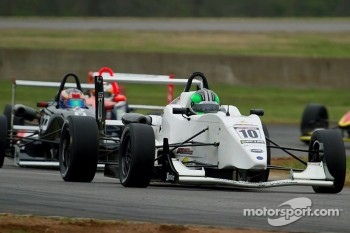 For La Rocca, the pole, fastest lap and victory were business as usual for the HP-Tech driver from Venezuela.

“It was a good race and the HP-Tech guys gave me another fast and consistent car,” said La Rocca, driving the No. 10 Van Diemen. “As for the win record, it is huge, and we can still improve the car for tomorrow”

Coello, off a win in the pouring rain at Summit Point, mustered a second place effort in the RFR chassis, also making contact while trying to steal the lead on the last lap.

“I saw those two (Robert La Rocca and Wyatt Gooden) coming to the restart,” said Coello, hinting he knew to prepare for some fireworks. “I had a head of steam later in the lap and La Rocca blocked me, and I kept my foot in it, making contact with him, but I got on the brakes like a nice guy going into the corner and couldn’t get back to him.”

The late race restart was a caused by a yellow flag for Steve Bamford, who went off in the closing stages of the 14-lap event, driving the same car Remy Audette won the 2011 F2000 Championship in.

Gooden solidified his second place spot in the points standings with another strong podium drive, hanging on for third. Gooden’s car was damaged, with his front wing nearly ripping off following contact with La Rocca, and his shock cover flying off into his rear wing.

“Not sure what happened on that restart,” Gooden said. “It’s the same thing that’s been happening. Robert drove down to the inside and I tried to dart out at the last second and misjudged it.”

Kyle Connery came home in fourth in the No. 91 RFR, adding that the team was still fighting for straight line speed and he was hoping for rain for Sunday’s season finale race.

In his first start of the season, Rob Nicholas won the Masters Class with his fifth place drive in the freshly-painted No. 89 entry for K-FAST.

“That was a nice, clean race,” said Nicholas. “I’m not sure we have anything for La Rocca but a podium is feasible tomorrow, especially since we are fighting a bit of understeer and can make adjustments.”

Winning the WISKO Best Start Award were Vaughn Horvath and Jim Hanrahan, both improving five positions on the opening lap.

NA-F2000 round one VIR preview