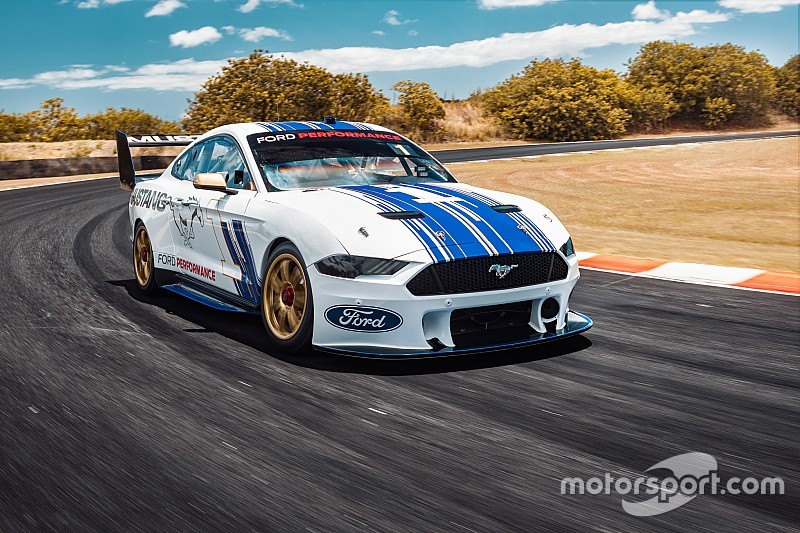 Ford Performance has officially launched the brand new Supercars-spec Mustang ahead of the 2019 season.

The Ford Performance Mustang launch marks the first look of the new racer without the camouflage paintwork used in testing.

However this special livery won't actually be raced, with the Ford team launches set to start with the Tickford-run 23Red Racing on Friday.

The look of the Mustang has been a hot topic during the Supercars off-season, initial photos and videos from testing splitting opinion on social media.

This opening launch will now give fans a proper look at the car in a more traditional livery.

“Today is when we show the fans what the Mustang Supercar really looks like, ready for the 2019 Virgin Australia Supercars Championship,” said Ryan Story, boss of the DJR Team Penske outfit that has led the homologation of the car.

“This project wouldn’t have been possible without the support of Ford Australia, the Ford Asia Pacific Design studio, and the pivotal involvement of Ford Performance in the United States.”

Kay Hart, President and CEO of Ford Australia and New Zealand, added: “This is an historic moment.

“To see the project come together has been incredibly exciting for everyone involved, and today marks the start of Mustang’s 2019 season.

"Mustang belongs on the track and everyone at Ford and our fans have been waiting for this moment.”

The Mustang has been developed as a three-way joint venture, with DJRTP named as the official homologation partner, but both Tickford Racing in Melbourne and Ford Performance in the US heavily involved.

“That development has been proven out through other programmes – the Ford GT at Le Mans for example – and we then transfer that back, that knowledge, back to the road car.”

The Mustang livery unveils will kick off with the 23Red Racing car on Friday, followed by Tickford's Monster Energy-backed car on Saturday.

The two Shell-backed DJRTP entries will then be unveiled next Monday morning, before Tickford rounds out its reveals with Chaz Mostert's Supercheap car on the Tuesday, and Lee Holdsworth's Bottle-O entry on the morning of the Phillip Island test on February 14.