Leaving the circuit yesterday Fabian Couthard felt dreadful after breaking his car on the Gold Coast's infamous curbs but he made amends in today's race. 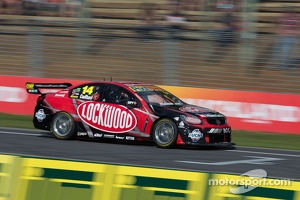 The Lockwood Racing driver came from 16th on the grid to score second place for the team, which spent most of last night repairing suspension damage.

The closing laps were a tense affair as Russell Ingall and Jamie Whincup pressed Coulthard but he put up a solid defence to secure the podium after being handed the car by co-driver Luke Youlden in third.

Phillip Island is the penultimate round of the season and will be held on 22-23 November.

Fabian Coulthard, Lockwood Racing: "P16-P2, it's not bad is it? Walking home from the track yesterday, I was pretty gutted. I let the team down. I was weak through that back chicane and I needed to find some time and I went about finding it but failed.

"To come back today with a car that's still not perfect after the damage I did and come through to get second is awesome. Luke did an awesome job as did the whole team.

"I had a good battle with Russell Ingall at the end there. He left me a car width's room and no more and was breathing down my neck for the most of it!"

Luke Youlden, Lockwood Racing Co-Driver: "I was trying to keep a cool head but I was frustrated to be fair. The car had more pace than we could show stuck in traffic. I wasn't sure how the strategy was going but obviously the boys made a really good call and I got some clear laps and pushed on."

IRWIN Racing posts a high-five on the Gold Coast