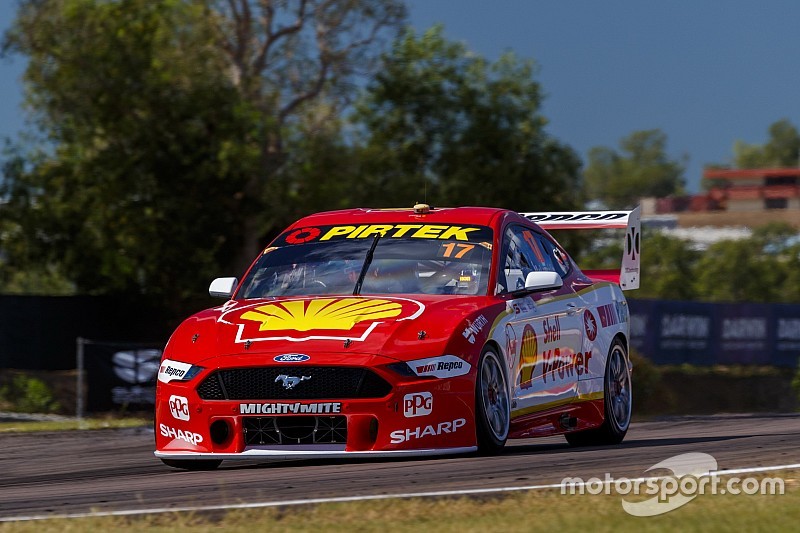 The DJR Team Penske driver showed his hand early in Q2, a 1m06.126s on his first flyer leaving him comfortably on top.

He did emerge for a safety run at the end of the 10-minute segment, but failed to improve on that early benchmark.

It was the same story in the pole-deciding Q3 session, McLaughlin setting a weekend-best 1m06.010s on straight out of the gate.

Again he did look to improve with a final run, but after going purple in the first sector he elected to abort the lap after a mistake in the middle sector.

Not that it mattered, the points leader still taking his 10th pole of the season, and a 600th for the Team Penske organisation.

He also put himself level with Peter Brock on 57 Australian Touring Car Championship/Supercars poles, the pair sitting second on the all-time list.

“It’s so cool. This is obviously for The Captain and his team,” he said. We came on very late [to the Team Penske organisation], but glad to add a few poles to it.

“To get the cheque today, our 10th of the year, is fantastic.

“Our car is awesome, I stuffed up that last lap, I’m pissed off, but anyway, it’ll be alright I was up a fair way in that first sector and just tried to brake too hard and locked up.”

David Reynolds ended up second, although the Erebus driver was made to work for it. He had been sitting behind McLaughlin after the first run, but was knocked onto the second row by Will Davison when the final runs started.

Reynolds was able to respond, though, moving back into second with a 1m06.153s right at the flag.

That moved Davison back to third, with Anton De Pasquale capping off a solid session for Erebus with fourth.

Jamie Whincup will start eighth in his Red Bull Holden, Kiwis Andre Heimgartner and Fabian Coulthard rounded out the Top 10.

Shane van Gisbergen will start down in 12th, next to Nick Percat, after failing to make it out of Q2.

The Red Bull Holden driver only just scraped out of Q1 with the fifth-best time, before opting for just a single late run in the second segment, which wasn't good enough to sneak into the Top 10.

"We were good on the old tyres, it's the story of our last few rounds," said van Gisbergen.

"It's a shame, but that's where we are. It's quite simple, we're not fast enough. We just need to try and make it better."