Whincup storms back in Townsville

The door has been left ajar by Mark Winterbottom and Craig Lowndes for the near unstoppable Jamie Whincup to roar back into the V8 Supercars Championship.

Whincup smashed his way back through the misfortunes of the pair in the long-distance Sunday race of the Castrol Townsville 500 - Driven by TAFE Queensland.

He drove into second in the Championship with his one second victory and into a direct battle with Winterbottom who still holds a 96 point lead, now over Whincup. 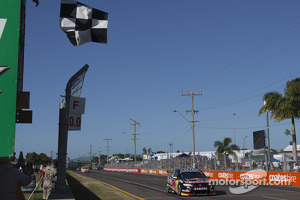 "They've done a fantastic job, I give credit where credit is due, they're flying out of the box and they were absolutely lightning in places like New Zealand.

"They were certainly the class of the field so that form will come back when we get into the soft tyre races. They are still extremely dangerous but we will keep our head down and if we can repeat today's performance I think we are in with a shot."

"We haven't won a Sunday race all year, believe it or not, all of our races have come on the Saturday and we haven't been able to go over that distance but there has been plenty going on behind the scenes but we got it right today," he said.

"You don't win those races without a fast car so that was the be all or end all and I felt like I did a reasonable job behind the wheel as well."

Winterbottom was hampered by a pit stop problem but as he did the previous day fought hard to finish as best he could, coming in sixth to make the most of the weekend.

"We had to queue in the pits so you sort of go a bit far back from there. I'm not sure how we ended up at sixth but our tyres were gone at the end, but it was good to salvage something," Winterbottom said.

"We need to get quicker, there's no use worrying about any points until we can start winning races again. If it was the last race of the last round of the championship you'd worry about it.

"We need to get our speed back to where it could be."

But Lowndes' day was horrendous as he struggled with water and temperature problems that continually forced him into the pits.

His twenty-third place finish dropped him down the leader board from second to sixth while Fabian Coulthard regained his third spot on the Championship ladder.

"I don't know if you can print it, but it's been a shit of a weekend. As Peter Brock used to say it's been a character-building weekend," Lowndes said.

"We put ourselves in a really good position at the start of that race, I don't know what went wrong but it's losing water somewhere. But that's motor racing. Roll on Ipswich."

While the field got away more cleanly than yesterday, a lap one scuffle between Jack Perkins and Dale Wood called out the Pedders Chrysler Safety Car.

While many of the front runners decided to pit - FPR and HRT stacking their contenders - Whincup stayed out and opted for a different strategy to tackle the 87 laps ahead of him.

Pit stops played out, some stops selecting to go for the three-stop strategy, including Van Gisbergen and TEKNO Autosports.

Others to note include first Nissan Michael Caruso 11, Fabian Coulthard 14, and pole man Jason Bright 17 after a pit lane penalty.

The next V8 Supercars event is the Coates Hire Ipswich 400 from August 1-3.

Mark Martin has one fear in racing