Porsche quickest at The Prologue

Porsche’s new 919 Hybrid made an impressive debut in the FIA WEC and the team’s No.20 ended up as the fastest car overall.

The Prologue for the 2014 FIA World Endurance Championship has come to a close, following 17 hours of testing for the teams and competitors present at Circuit Paul Ricard in France.

With a strong, cool wind blowing across the track, conditions were tricky and eight of the 25 cars present chose not to run in the final 3-hour, Saturday afternoon session. Only one car improved its best time from the last two days, the No.8 Toyota Racing TS040 Hybrid of Davidson-Lapierre-Buemi, but it was the No.2 Audi Sport Team Joest R18 e-tron quattro of Fässler-Lotterer-Tréluyer which set this afternoon’s fastest lap (1:43.423).

Porsche’s new 919 Hybrid made an impressive debut in the FIA WEC and the team’s No.20 ended up as the fastest car overall in the hands of Timo Bernhard, Mark Webber and Brendon Hartley. The only red flag of the weekend came out this afternoon when the No.14 Porsche lost a wheel while out on track. 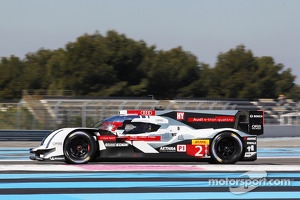 Rebellion Racing’s two LMP1-L Lola Toyotas ran throughout the two days of testing, the Swiss team using its 2013 cars at The Prologue as its new R-Ones have been slightly delayed in preparation.

Just three of the LMP2 cars present ran this afternoon, with the No.47 KCMG ORECA 03 Nissan of Howson-Bradley-Masuda setting the best lap with a time of 1:51.071. With the regulations restricting the amount of engines allowed for a season, the LMP2 teams completed a limited number of laps over the two days. SMP Racing’s two entries were second and third in class this afternoon, but it was Shinji Nakano in the No.23 Millennium Racing ORECA 03 Nissan who claimed the fastest lap of the weekend in the category.

Of the four LMGTE Pro cars present at The Prologue, only two were in action this afternoon. AF Corse’s single Ferrari 458 Italia, which today was driven by World GTE Champion Gianmaria Bruni as well as Rigon and Calado, topped the class time sheets with a lap of 1:59.701. Aston Martin Racing’s No.99 – crewed by newcomers to GTE Pro, MacDowall-O’Young-Rees – was second in class this afternoon, but the fastest class lap of the weekend was set yesterday afternoon by the No.92 Porsche Team Manthey 911 RSR.

LMGTE Am’s competitors were also depleted in number this afternoon, but that didn’t stop the No.88 Proton Competition Porsche 911 RSR of Bachler-Ried-Al Qubaisi from making its mark. The time of 1:59.042 set this afternoon actually put the Am car above its Pro competitors in the standings but it is worth remembering that this is just a test session. Second in class today was the No.61 AF Corse Ferrari 458 of Perez Companc-Cioci-Venturi, but fastest overall in the category during the two days of The Prologue was the No.90 8Star Motorsports Ferrari 458 of Potolicchio-Roda-Ruberti.

For the FIA WEC competitors attention now turns towards the 6 Hours of Silverstone, the opening round of the championship which takes place on Sunday, 20th April.

3,556 kilometres for the Porsche 919 Hybrid at the Prologue in Paul Ricard