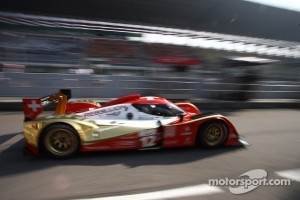 REBELLION Racing will be looking to re-confirm its status as the best privateer sportscar team at the highest level of endurance racing.

In 2011, the Swiss team won the Le Mans Series LMP1 Team Championship and the Le Mans Series Manufacturers Championship for Lola and Toyota. In the Intercontinental Le Mans Cup, REBELLION Racing ended the season in third place in the Teams classification as the best private team behind Peugeot’s and Audi’s factory teams. REBELLION Racing’s other main achievement of the 2011 season was the 6th place overall finish at Le Mans 24 Hours; recording the highest placed finish for a petrol LMP.

REBELLION Racing has selected four drivers that will share driving duties in the 2012 FIA World Endurance Championship. The team have renewed the contracts of three of its regular 2011 drivers; Andrea Belicchi, Neel Jani and Nicolas Prost.

REBELLION Racing is pleased to announce that former Aston Martin Racing LMP1 works driver Harold Primat will also be joining the team. Harold Primat, was an Aston Martin Racing LMP1 official works driver from 2009 to 2011; winning the 6 Hours of Laguna Seca in 2011 and the 500 km of Okayama in 2009 on top of many other podiums finishes in both the Le Mans Series and American Le Mans Series and a 6th place overall finish at Le Mans 24 Hours in 2010.

Bart Hayden, REBELLION Racing Team manager; "We have another strong driver line-up for this year. Complementing our existing driver line-up, I am pleased to welcome Harold on- board, he will bring a great deal of experience to the team.”

More details on 2012 team’s Lola LMP1 cars and team’s full driver line-up for the 24 Hours of Le Mans will be unveiled at a later date.