Toyota’s Ott Tanak has won the World Rally Championship title with one round to spare with second place on Rally Catalunya, as Hyundai’s Thierry Neuville took victory. 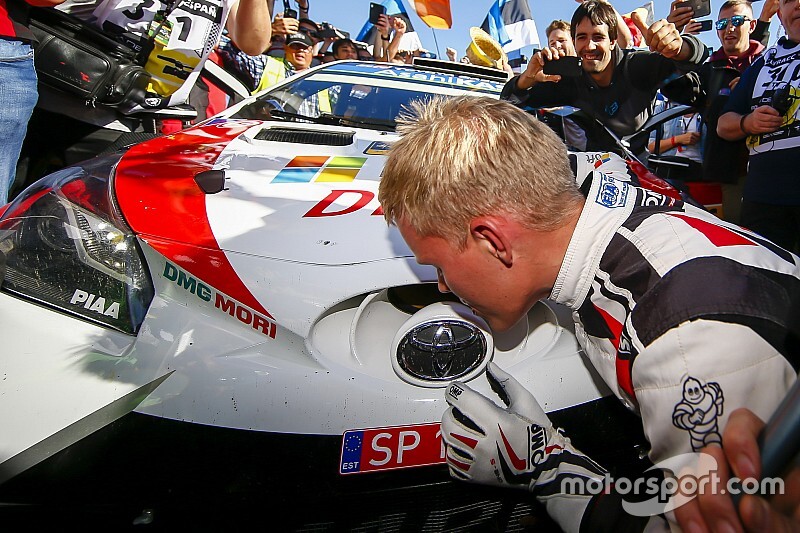 Neuville did all he could to deny Tanak’s title with a perfectly controlled performance, hitting the front on Saturday when the action switched from gravel to tarmac and winning the rally by 17.2s over Tanak, who overhauled Dani Sordo on the final stage.

Needing to beat or finish just one place behind Neuville on the test, Tanak won the Power Stage with a scorching time, 3.6s quicker than Elfyn Evans with Neuville third quickest.

Tanak’s title means he is the first man to defeat either Sebastien Loeb or Ogier across a full season since Petter Solberg in 2003 and it also marks the first drivers' title for Toyota since Didier Auriol's triumph in 1994.

Defending champion Ogier was the other driver capable of stopping Tanak and led the rally after the opening stage but a hydraulic failure on stage two left his Citroen without its paddle-shift gear selector and crucially bereft of its power steering.

Ogier struggled on but lost four minutes, eventually forced to settle for eighth.

All three Hyundais flirted with the lead on Friday’s gravel tests following Ogier’s demise. Sordo took the early initiative but it was Sebastien Loeb who led a Hyundai 1-2-3 after Friday with an astonishing time on the final test.

As Neuville powered ahead on Saturday, Sordo and Loeb couldn’t keep up and fell into the clutches of a hungry Tanak in fourth. Loeb was overhauled by Tanak on Saturday’s final Salou spectator stage, but Sordo kept his nose ahead.

Sordo repelled Tanak throughout the majority of Sunday, but Tanak’s sensational push on the Power Stage was enough for him to steal second from Sordo by 0.4s.

Loeb wound up a distant fourth, with Toyota’s Jari-Matti Latvala finishing a mere 6.3s behind in fifth place to prolong the manufacturers battle onto Australia.

M-Sport’s Evans had been squabbling with Latvala for fifth but an engine misfire on Friday and brief lapses of confidence on Saturday confined him to sixth place.

Teammate Teemu Suninen finished seventh, surviving a late scare on the Power Stage when he slid wide into a bank and suffered a half-spin.

Kris Meeke had climbed as high as third on Saturday morning, threatening the Hyundai juggernaut, but pushed too hard on the morning’s second test and whacked his Toyota Yaris WRC into retirement.

Through no fault of his own, Esapekka Lappi compounded a weekend to forget for Citroen. Lappi had been in the mix until Friday’s final test when an engine-related issue stopped his C3 in its tracks.

The issue proved so severe that Lappi wouldn’t start either of the two tarmac legs.

Takamoto Katsuta was on for a points-scoring finish on just his second WRC appearance in a Toyota Yaris WRC but a gear selection issue on Saturday’s opening stage lost him over half an hour.