Sykes makes it eight in today's Superpole at Magny-Cours 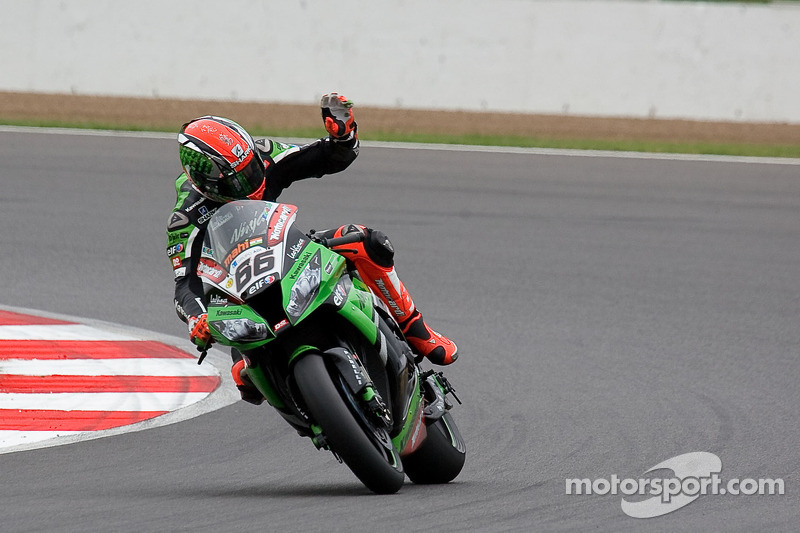 The French round for the World Superbike series saw the points leader secure his 8th Superpole of the season.

Magny-Cours (France) - Tissot-Superpole for the French Round was held under mixed conditions and saw Tom Sykes (Kawasaki Racing Team) claiming the front spot on the grid for the 8th time this year. The Brit will be joined on the first row by title contender Sylvain Guintoli (Aprilia Racing Team), who was able to elevate himself to second in the closing stages, and Davide Giugliano (Althea Racing Aprilia).

By the start of the second "wet" session the track had started to dry, meaning most riders opted to use slick tyres. Times dropped considerably throughout the 20 minutes, with Sykes being the first rider to break into the 1'39s barrier with 9 minutes left, finally setting a blistering 1'38.592s in his last attempt for pole.

Both Michele Pirro (Team Ducati Alstare), tenth, and Leon Haslam (Pata Honda World Superbike), fifteenth, crashed out at Turn 12 during Superpole 1: the Italian high-sided at mid-turn, landing badly on his back but with no major consequences, while Leon Haslam low-sided while entering the corner, eventually crossing on foot the track to pick up his bike and successfully make it back to the pits.

Tom Sykes: “This is a great place to get pole position, especially in these conditions. Three riders in two corners made it very difficult for me in the fast lap so I am sure it was very exciting for those watching on TV! From where I was sitting it was quite dangerous. I hope it is dry tomorrow because if we have good conditions everybody will be fighting and putting on a good show for the crowd. Our bike is working well but we can still improve it even more in wet conditions.”

Sylvain Guintoli: “The conditions were difficult this afternoon, with a lot of wet spots that were hard to see. It was a tricky situation but in the end we came away with an important second spot on the grid. In any case my race pace is fast and I want to stay focused on riding as well as possible without making any calculations. I'm hoping for two dry races tomorrow. I was very fast in these conditions yesterday and I'd like to give my French fans something to cheer about.”

Kenan Sofuoglu (Mahi Racing Team India Kawasaki) has scored his fourth pole position of the season today after second qualifying for the World Supersport Championship at Magny-Cours. The Turk ended the session in a bad way, though, due to a heavy crash he suffered at Turn 3 in the final stages, that led to a Red Flag situation.

Room for improvement for Team SBK Ducati Alstare at Magny-Cours