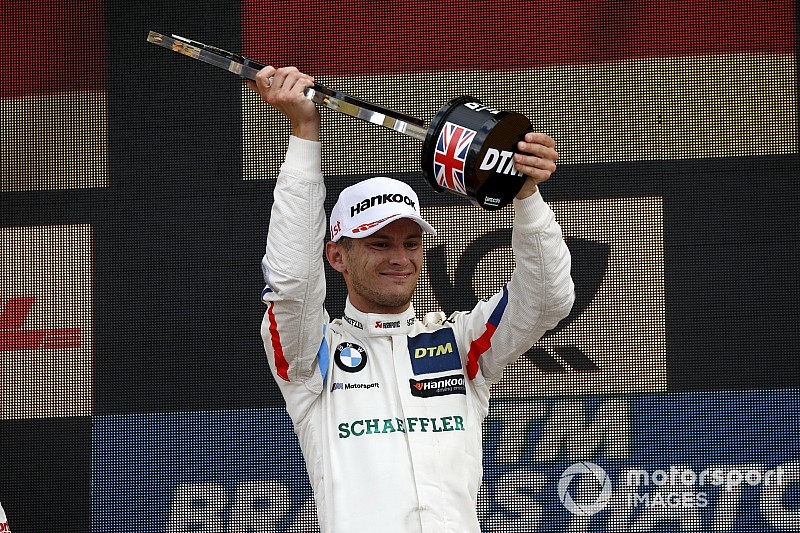 Polesitter Wittmann, as well as Rast, bogged down off the line as Di Resta made a start so swift that it put him under investigation as he powered his R-Motorsport Aston Martin Vantage into the lead down Paddock Hill Bend.

At the end of the first lap, Di Resta established a lead of almost one second over Wittmann and defensive driving allowed the underpowered Vantage to hold onto an unlikely lead through the first phase of the race.

Di Resta would concede the lead once he made his mandatory pitstop on the 16th lap of 42, serving a five-second penalty for his jumped start, but Wittmann had to work his way back into the net lead having stopped two laps earlier.

The crucial move came when Wittmann steered his BMW through a narrow gap caused by the early-stopping Jamie Green running wide at Paddock Hill Bend, opening up space for the two-time DTM champion to power past the Audi driver and then-net leader Rast.

Once the pitstops had shaken out, Wittmann had a lead of over five seconds to Rast.

A slow lap from Wittmann late in the race allowed Rast to close to within three seconds and the Audi driver loomed large behind the BMW driver on the final lap. But Rast was unable to find a way past and crossed the line just 0.3s behind Wittmann.

Rast had put himself into position to hound Wittmann by picking off two Audi stablemates on the run to Hawthorns in quick succession following his mandatory pitstop.

He first passed Loic Duval and then relegated title contender Nico Muller to the final place on the podium. Duval would fall to fifth at the flag after Audi's Robin Frijns pulled off a similar move to Rast to take fourth late on.

Philipp Eng managed a series of aggressive moves to seal sixth on the grid, most notably running side-by-side with di Resta through Paddock Hill Bend and scything past at Druids before passing Mike Rockenfeller late on.

Juncadella's points finish was aided by an as-yet unexplained retirement for Di Resta late on, who joined his teammates Ferdinand Habsburg and Jake Dennis in the garage.

Habsburg retired not long after an off at the exit of Sheene, while Juncadella's rapid start pushed BMW's Timo Glock into the R-Motorsport driver's teammate Dennis.

Dennis then collided with the pitwall and damaged the rear of his car, forcing him into retirement.

WRT's Pietro Fittipaldi did not take part in the race after the heavy damage sustained to his Audi in his qualifying crash could not be repaired in time. BMW's Joel Eriksson also failed to start the race.

BMW had replaced Wittmann's engine ahead of the Brands Hatch race and introduced two spare power units, which means it cannot count the points from Wittmann, Eng or van der Linde towards its manufacturers' total.