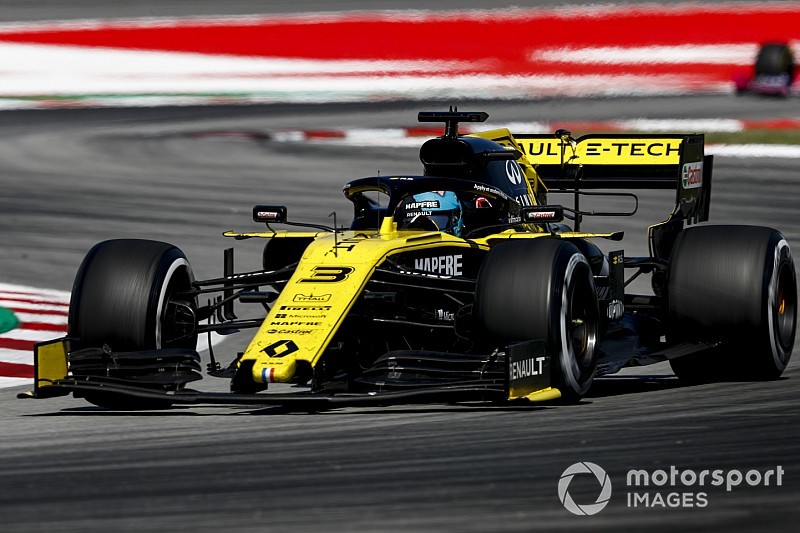 The Australian started 13th courtesy of a three-place grid penalty for reversing into Daniil Kvyat in the Azerbaijan GP, and spent the opening part of the Barcelona race in 12th, bottled up behind the McLaren of Carlos Sainz.

Ricciardo did overtake Sainz for position before the pair pitted at the end of lap 24, but emerged on hard tyres and was soon repassed by the McLaren, which had fitted mediums.

The intervention of a safety car later helped Sainz rise to eighth, but Ricciardo made no further progress and finished 12th.

Citing the performance of the McLaren, which Sainz said had "no pace", Ricciardo said he was annoyed that "a small lack of perfection" had cost Renault a decent points haul.

"I'm frustrated, to be honest with that," said Ricciardo after the race. "I see Carlos was eighth, we had him at the end of the first stint and then we fitted a hard, he fitted a medium and he passed us on the out-lap.

"And obviously, look at where he finished and where he did with his pace. To be honest I think we underachieved with the result that the car is capable of. It's just little things, and this midfield is so tight, a small lack of perfection and we potentially miss four points.

"We've just got to try and do better, I guess, try and figure out what we can execute and understand, why we fitted the hard instead of the medium, and if that was us being too cautious then let's not be cautious."

Like the majority of runners, Ricciardo took a second pitstop during the safety-car period, but that dropped him behind teammate Nico Hulkenberg - who ran a one-stop strategy after starting from the pitlane.

Ricciardo caught up to 10th-place finisher Romain Grosjean and Alexander Albon before the finish, but said restarting behind Hulkenberg cost him the chance to attack those vying for the final point.

"I think where we missed out was the restart, we lost track position again [by] pitting, and then we fell behind Nico and he was on a used tyre - I was on a new - and I think we had a chance on that first lap to attack the guys in front," he said.

"We were told we were able to fight, but yeah, I couldn't really see him advancing with that tyre as I could with mine. Again we'll see now, sort it out if strategically we could have maximised one car over the other."

Zetsche deserves "all the credit" for Mercedes F1 success