Sainz fears Renault will be strategic anomaly in Singapore 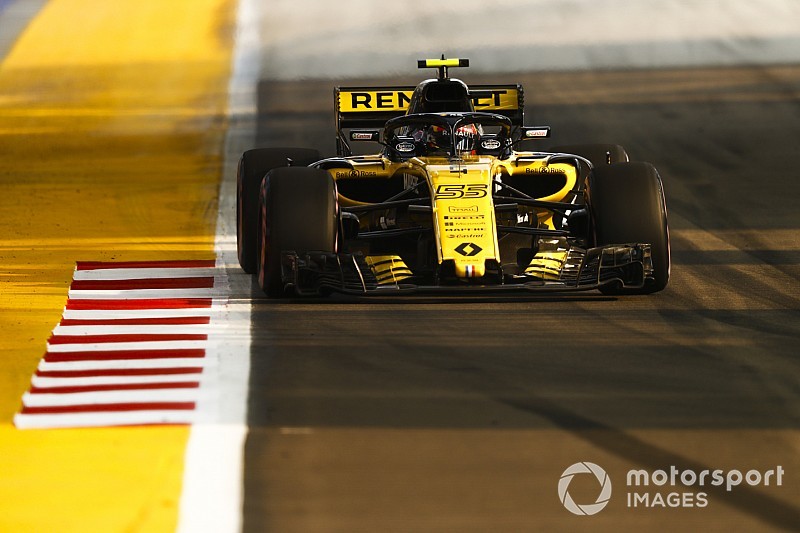 Carlos Sainz believes his car’s inability to look after its tyres will force the Renault Formula 1 team into a disadvantageous strategy for the 2018 Singapore Grand Prix.

While F1 tyre supplier Pirelli believes that a two-stop strategy is optimal, maintaining track position is vital at street circuits and any multi-stop strategy carries the risk that a driver might get bogged down in traffic.

Many teams have expressed a preference for a theoretically slower one-stop strategy - which may only be possible for those starting outside the top 10.

Renault's RS18 is less sympathetic to its tyres than many of its competitors, which enables its drivers to unlock one-lap pace but at the expense of rapid degradation when attempting longer stints.

The issue is more acute on Pirelli's hypersoft compound, introduced at Monaco this year.

"That's the problem," said Sainz. "No one wants to stop twice and it's looking likely for us as things stand.

"But we'll work to see how we can fix that degradation. We know it's there. We know it's been there all season and we know we have improved, but it's still our weak point.

"Even at Monaco we saw people starting 11th so they didn't have to start on the hypersoft, and they finished the race ahead of us – who were in Q3.

"It will be a dilemma. I trust we can take a step forward and improve the degradation because what a driver wants is to always extract the best in qualifying and then do your race."

The arrival of the hypersoft has shaken up the strategic picture in Singapore.

After spending much of the season complaining about lack of differentiation in pace between Pirelli's different tyre compounds, drivers are having to grapple with a scenario in which the performance gap between the compounds is much closer to that which they have been demanding.

In Friday's free practice sessions many teams registered almost 1.5s difference in laptime between the soft, ultrasoft and hypersoft.

The situation is roughly analogous to the grands prix in China, Germany and Hungary, where Pirelli also skipped a 'step' between compounds in a successful bid to encourage divergent strategies. In Singapore it has opted not to bring the supersoft.

Track conditions can also play a part. In hot but gradually cooling conditions in the day-into-night Bahrain Grand Prix, eight of the drivers in the top 10 ran very different strategies.

Even so, on a track at which it's easier to pass than at Singapore, Valtteri Bottas couldn't overtake Sebastian Vettel for the win despite having a tyre advantage.

"If they start the race with the hypersoft, the quicker strategy is two-stop, with two sets of hypersofts and one set of ultrasofts," said Pirelli motorsport manager Mario Isola.

"I believe in that case they start on hypersoft, they put the ultrasoft in the second stint, and the hypersoft again at the end because the car is much lighter, and the drivers are able to control the degradation much better.

"If somebody outside the top 10 starts on the ultra, they can maybe try a one-stop strategy with ultra and soft. But on paper it's not the quickest one.

"One stop, with the hypersoft and a very, very long stint on the soft, I don't think is a good strategy in terms of performance. There is the potential risk of blisters [on the soft] similar to what we saw in Monza and Spielberg."

Despite Pirelli's caution, it's clear that the majority of teams would prefer to stop just once, given the high value of maintaining track position at a street circuit where passing is difficult and the DRS effect not very powerful.

As Sainz points out, in Monaco a number of competitors benefitted from missing the cut for Q3 and therefore gaining a free choice of starting tyre. But even the frontrunners are mulling the possibility of a one-stop.

"You definitely can't do too long of a stint with the hypersoft," said Bottas. "But then the soft is quite the other extreme, you can do a very long stint with the soft if you managed it well.

"Normally here, whatever you plan, with the safety cars your plans are going to change - the key is to be dynamic in the race."

Live: Follow qualifying for the Singapore GP as it happens