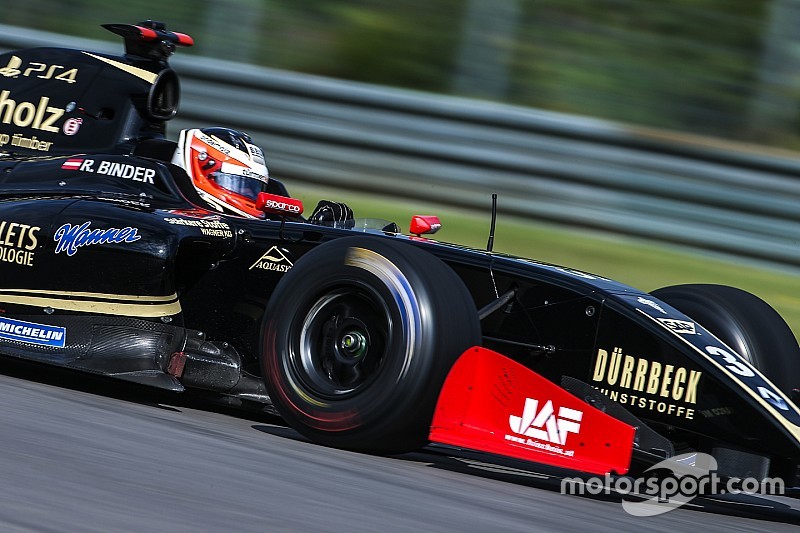 Rene Binder claimed his first Formula V8 3.5 pole as he led a Lotus one-two at the Circuit of the Americas.

The Austrian, who had been suffering from a lack of speed at the Nurburgring and Mexico City, carried on the blistering form he showed in the second free practice session to set a 1m49.764s.

Racing with a new engine this weekend, after a failure in Mexico, Binder said that he felt the car had the speed to be at the front of the grid for race one and he used that pace to good effect to edge out team-mate Pietro Fittipaldi.

Fittipaldi, the championship leader after dominating the Mexico round, was the only other driver to dip into the 1m49s as he set a 1m49.932s.

His time, set on the final lap, knocked Egor Orudzhev off the second row as he saw his penultimate lap ruined with a yellow flag at turn 19 ruining a lap which included a session best middle sector.

Joining him on the second row for Friday’s opening race will be Alex Palou, the Teo Martin driver was fastest for a time with his 1m50.083s but couldn’t find the pace to unseat the trio ahead.

Fifth, and hoping he can make up ground in the race, is second in the championship Matevos Isaakyan, the SMP Racing driver not able to match the front-running pace.

Konstantin Tereschenko, who claimed his maiden podium in Mexico City, will be hoping to repeat that achievement in Austin starting from sixth.

The fourth row is filled by the Fortec Motorsport duo of Alfonso Celis and Diego Menchaca. Yu Kanamaru, Roy Nissany and Giuseppe Cipriani round out the 11-car field.