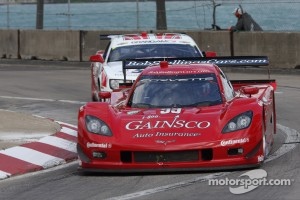 LEXINGTON, Ohio (June 8, 2012) – Jon Fogarty has a penchant for winning Rolex Series pole positions in bunches and the driver of the No. 99 GAINSCO Auto Insurance Corvette DP did it again on Friday. He won his second TOTAL Pole Award in as many weeks in qualifying for Saturday’s EMCO Gears Classic at Mid-Ohio Sports Car Course.

Fogarty turned a best lap of 1:18.079 (104.110 mph) in the red Corvette DP he shares with co- driver Alex Gurney. It was Fogarty’s 21st pole position of his GRAND-AM Rolex Sports Car Series career and comes on the heels of Fogarty’s pole winning run last week at Detroit’s Belle Isle Park.

“We definitely made some pretty aggressive moves for qualifying,” said Fogarty, the all-time leader in Rolex Series poles. “We were hopeful they were going to be the right moves and they obviously were. It’s nice to have two poles in a row. We’ve been showing good pace. Those were pretty bold changes and I’m happy we made them for qualifying.”

Starting alongside Fogarty will be Michael Valiante in the No. 90 Spirit of Daytona Racing Corvette DP. The Canadian, who co-drives with Richard Westbrook, posted a best lap of 1:18.443 (103.627 mph). Ricky Taylor will start third in the No. 10 SunTrust Corvette DP after a best qualifying lap of 1:18.499 (103.553 mph). Taylor’s co-driver is Max Angelelli. Corvettes claimed the top five starting positions for Saturday 2-hour, 45-minute race.

“After my last pole at New Jersey, I made a mistake being a little too cautious into Turn 1 and let Sylvain [Tremblay] right around the outside of me,” Edwards said. “I won’t be making that mistake tomorrow. I’ve got to be on my game from the very start and not under drive the car.”

After clinching the Rolex Series GT title at Mid-Ohio when it was season finale last year, Andrew Davis will start second in GT with a lap at 1:25.429 (95.153 mph) in the No. 59 The Brumos Companies Porsche GT3. Davis’ co-driver is Leh Keen. Paul Edwards qualified third in GT at 1:25.706 (94.845 mph) in the No. 88 Autohaus Motorsports Chevrolet Camaro GT.R. He and co-driver Jordan Taylor took the GT victory last week in Detroit.