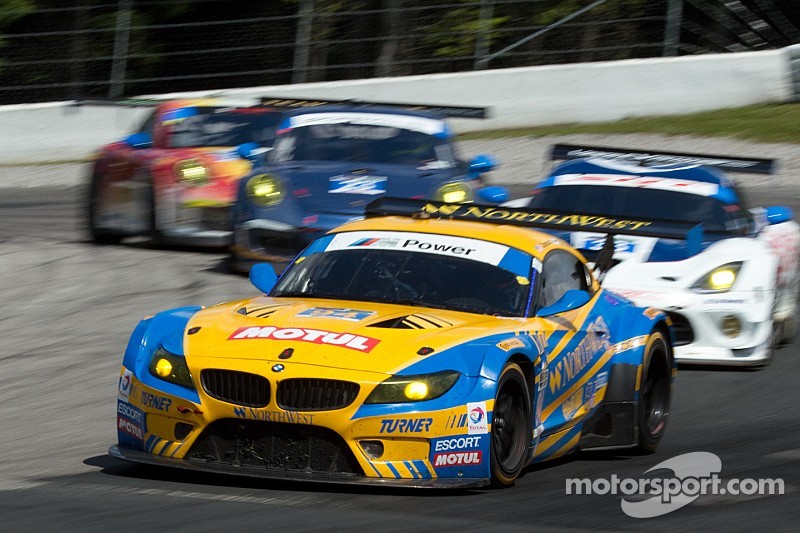 The win also extends Turner Motorsport’s impressive podium streak at the 4.048-mile, 14-turn “National Park of Speed” to three as the blue and yellow of Turner have become a familiar site atop the podium at Road America with a double podium in 2013 and a second place finish in 2011.

The strong result did not come without challenge as the Turner BMW Z4 was not the fastest car on track. An incident in early morning practice involving the No. 007 Aston Martin defaulted the pole position to the No. 94 BMW of Cameron and Palttala, giving them an edge early in the race.

This win was huge for us, we lost some crucial points in Indy so this helps us quite a lot in the standings...

Markus Palttala took the green flag from the front row and worked hard in the opening laps to stay out in front of the hard-charging Viper. Despite Palttala’s hard work maintaining his lead, several early full course cautions bunched up the field, putting the quicker Porsches right on his heels.

“Luckily we inherited the pole from the Aston which made our job a little bit easier, but not easy enough. The full course cautions and restarts stacked up all the faster cars right behind us which made both Dane and my jobs very difficult. In the end it just worked out perfectly, we were able to use traffic to our advantage plus our awesome pit stops kept us out front,” said Palttala.

Palttala completed his 60-minute opening stint to hand the No. 94 Turner Northwest BMW over to co-driver Dane Cameron in P1. An impressive full stop rocketed Cameron out of pit lane to reassume the lead. Cameron quickly set into a rhythm slowly stretching that lead until another full course caution tightened up the field yet again.

With just about one hour remaining, the decision was made to bring Cameron in for two left side tires and fuel, a strategy call that allowed the blue and yellow BMW to beat the competition out of pit lane to regain the lead once again.

Cameron pushed hard in his closing stint, doing anything he could to prevent the No. 22 Porsche from taking over the lead. Cameron cleverly used traffic to his advantage, building a small lead to get himself across the line just two seconds in front of the higher top-speed Porsche.

“If there was anything we didn’t want to see in our car, it would be restarts with just a couple minutes to go. Luckily our pit stops, traffic and spacing made the difference to give me a little breathing room to get a jump on the field. We suffered on the straights but were very quick in the kink and on the carousel so I knew if I could survive to turn five we would be ok,” said Cameron.

With just three races remaining in the season, the No. 94 Turner Northwest BMW sits third in the Championship points standings, just 12 points out of first and 9 points out of second.

“This win was huge for us, we lost some crucial points in Indy so this helps us quite a lot in the standings so we will look to build off this in the remaining three races. I am confident the guys at Turner will work hard to give us a good car for VIR so I am looking forward to getting back in the car with Paul Dalla Lana in just two weeks,” added Cameron.

Turner will be back in action at Virginia International Raceway for the next round of the Tudor Championship on August 23rd and 24th. Paul Dalla Lana is set to return to the action for the Oak Tree Grand Prix, as he has no conflict with his WEC racing commitment. The race will be broadcast on August 24th at 4:00pm ET live on Fox Sports 1.