The yellow zoot suit just might make another ballroom appearance.

Helio Castroneves, who won "Dancing with the Stars" with professional partner Julianne Hough in November 2007, will be among the contestants returning for an all-star season of the ballroom dancing competition for the Mirror Ball trophy. 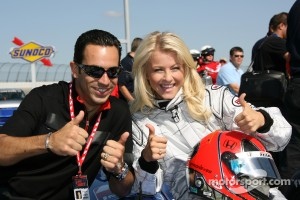 Helio Castroneves with Julianne Hough, his 2007 Dancing with the Stars partner

The Season 15 premiere on ABC is scheduled for 8 p.m. (ET) Sept. 24 - nine days following the IZOD IndyCar Series season finale at Auto Club Speedway in Fontana, Calif. The Team Penske driver is second to front-runner Ryan Hunter-Reay of Andretti Autosport in the series championship standings entering the final four races of the season. The Honda Indy 200 at Mid-Ohio is up next Aug. 3-5.

"Winning the Mirror Ball trophy was an unbelievable experience and I'm honored that the show has asked me back to compete again this season," said Castroneves, a three-time Indianapolis 500 champion who won the July 22 Edmonton Indy. "I'm super excited to be in this position, and when I told my team they also were excited for me to do it again.

"We're all pumped up for another opportunity to start dancing again. What a great thing to show my daughter (2½-year-old Mikaella) what Dad did five years ago and hopefully can do again."

Castroneves said dance floor practice with his new partner likely would begin in early September -- "about the time of our Baltimore race and continue through Fontana." It's a schedule similar to 2007, when he began dancing with Hough following the race at Belle Isle on Labor Day weekend and continued through the season-ender at Chicagoland Speedway the next week.

"Obviously, my main focus is racing at this point," noted Castroneves, who is tied with Johnny Rutherford for 13th on the all-time Indy car victory list with 27 but is seeking his first IZOD IndyCar Series title. "Hopefully, we'll be celebrating two things."

And what about the bright yellow zoot suit with matching fedora that he initially wore for the Quickstep number in Season 5, which prompted one commentator to remark "you could power a fleet of buses on Helio's natural energy." Castroneves reprised the dance for his season's finale.

"I think that's going to be the key to me winning again," Castroneves laughed.