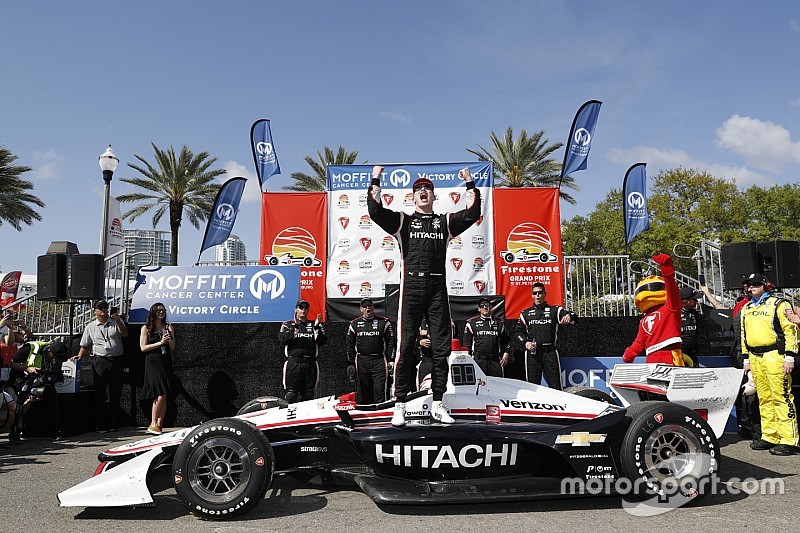 Josef Newgarden, who won the season-opening NTT IndyCar Series race at St. Petersburg, says key to his victory was running two sets of soft-compound red Firestones on a day when his main rivals were “scared” to do so.

In an ambient temperature of 80degF and with track temperatures reaching 112degF, all other teams and drivers elected to start the race on a new set of the reds and all but three drivers would switch to the harder primary rubber [black sidewalls] for the remainder of the race.

However, Newgarden, his strategist Tim Cindric and new race engineer Gavin Ward elected to risk starting the #2 Penske-Chevrolet on used reds and – because the regulation states that all finishing cars must have run a new set of each compound – taking new reds for the third stint.

The tactic worked perfectly, with Newgarden able to make his used reds last until 17, and remain in front of his main rival, Chip Ganassi Racing-Honda’s Scott Dixon, before going a lap longer on his second-stint primaries.

He re-emerged from his second stop in the lead and with a fresh set of primaries which allowed him to pull out a nine second lead as Dixon had to fight his way past Will Power’s car, which was compromised by fuel strategy and the off-strategy Marco Andretti on worn tires.

“Where we ripped a big one was on red tires,” said Newgarden. “When we went out on brand new Reds we were able to open up a huge chunk and it was just really good timing and positioning and once we established that gap [over Dixon], it was about managing it, really.

"We didn't have to blow it wide open and we didn't need to see it shrink too quickly but we let it seesaw back and forth how it needed to.

“We were five seconds in front, then nine, then seven, then five, then three, then two, then back to three. It yo-yoed a lot and really, all of it was traffic for the most part. I think we had the pace for him, for the most part, all day. It was just about conserving the gap.”

Regarding the decision to run two sets of reds, Newgarden commented that making the used ones last in the first stint was one of the keys.

“Everyone seemed quite timid on the reds today,” he said. “Everyone started on reds like they were just gun shy about what was going to happen with them – whether they were going to go off, or they just didn't think they were good on reds.

“When we saw that everyone was starting on new reds, it made us think about our decision. Because we started on used reds, that essentially locks you in – you [also] have to run a new set.

"But we wanted to be different. We wanted to have the ability, once the track rubbered in, to do something different and jump people.

“That's why at the beginning of the race I was just patient. I knew we had something up our sleeve there and that was really our strategy.

"I tend to think everyone was really scared of [reds] today, they didn't think they would be as strong on the red compound, but we felt very good on them. I thought it was a very good decision.”

Newgarden started on the outside of the front row, lost out to the second Ganassi car of star rookie Felix Rosenqvist into Turn 1, but retained third and ultimately kept Dixon behind him the whole race.

Although polesitter Power and Rosenqvist stretched their lead over Newgarden, the 2017 champion was able to stay in the picture and the gap closed back up in traffic in the second stint.

“I knew we had the car to win and so I was just waiting for our opportunities," he said. "I knew within cycles and tires, we were going to have an opportunity present itself, so I just kind of stalked those guys and waited for it and once it was there, we pounced.”

Several top runners ended the race annoyed by backmarkers trying to stay on the lead lap, and Newgarden was one of those who pointed out the lack of cooperation had a profound effect on his lead.

It essentially says that a backmarker doesn’t need to give way to a faster car until he is a lap down to the leader – but this raises the possibility of a backmarker giving the leader a particularly hard time in order to stay on the lead lap, and therefore benefit by cycling round to the back of the field should the race go under a full-course caution.

“Where it was tough was really the traffic,” Newgarden commented. “I don't know what we should do with the blue flag rule.

“We've had this rule we introduced three or four years ago and the drivers asked for this rule to be there. But it's tough, when you come up on traffic. You legitimately have to work your way through them and they are working push-to-pass to stay in front of you. It’s like trying to pass an actual competitor on the racetrack, not a lapped car. So that made it really tough today.

“I think, for sure, our Chevy compatriots made it easier for us than the Honda [runners], but it was probably the same case [with Honda runners] for Scott. So yeah, it was a real dogfight. It was about managing the traffic, your tires and the chess match at the end.”