Wickens: Racing in IndyCar again is “the dream” 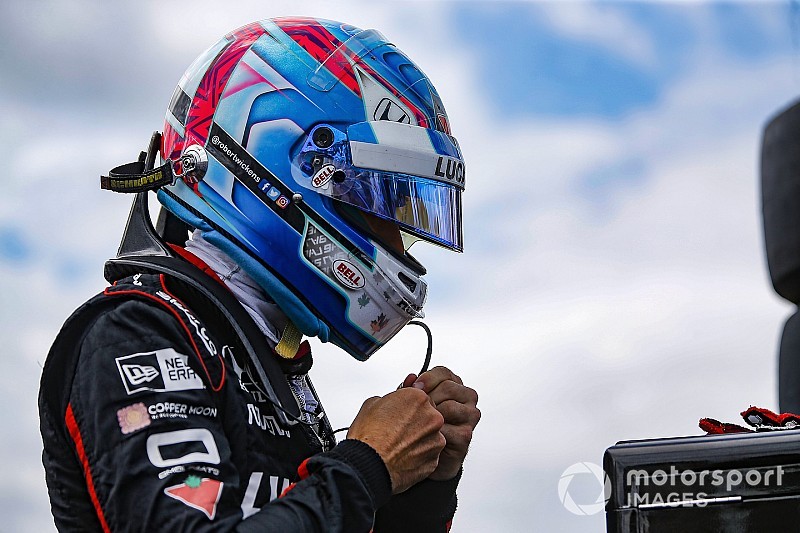 Robert Wickens, who is fighting back from a severe spinal injury, says that he’s determined to race again and hinted that if he can’t fulfill his goal of racing an IndyCar, he draws inspiration from those who race with hand controls.

Wickens suffered several injuries in a monstrous shunt at Pocono Raceway last August, and has since been rehabilitating and documenting his fight to walk again.

He made his first return to a race track today at the Firestone Grand Prix of St. Petersburg, in his current capacity of working with the drivers on the Arrow Schmidt Peterson Motorsports team. He also took time out for a media conference and there declared that he is still targeting a return to his previous role.

“The goal is to get back into an IndyCar,” he stated. “We won't know till I try if it's a reality.

“Apart from that, I mean, there's been so many remarkable drivers that have succeeded with hand controls in motorsports that it makes me believe that regardless of how my progression goes, I will be in a racecar again. Just a matter of which car. The dream is an IndyCar.
“I know the [Arrow SPM] team has been very outspoken that they'll always have a car for me when I can race. I think there's also rules and regulations that we have to abide by. I don't know how many modifications we can make, et cetera. We'll have to cross that bridge when we get there.”

Asked why he wants to return, he replied: “It's all I know. I mean, that's the biggest thing. From such a young age, I knew exactly what I wanted to do with my life. I told my parents when I was like nine or ten that I want to be a racecar driver. They laughed at me and told me that night in bed, Our kid wants to be a racecar driver. Like unachievable thing I wanted to do; I was telling them I want to be the first man to Mars…

“Everyone told me early on, ‘If you can't race again, you're still going to do something great with your life.’ I'm a hard worker. I know I'm going to land on my feet somewhere.

“But I wasn't happy with that answer. Like, I don't want a nine-to-five job hustling somewhere new. I want to hustle a racecar.

“Anything is possible. I know I'm a hard worker, analytical. I think I could get on top of hand controls. My only fear is that I always wanted to get back into racing n the same level that I left off. I don't want to be just a driver in the field. I want to be one competing to win or score podiums like I was when I went out. That's kind of the main thing for me.”

Describing his own personal progress, Wickens emphasized again that nothing is definite and that he has no idea what the final outcome will be.

“I'm getting some stuff back, getting better each day,” he said. “[But] you feel like you're on that road trip, it's the 100-mile road that's a straight line the entire time without any scenery, and you're just working as hard as you can to get to the end.

“We're getting there, one step at a time. It's basically all I can say – we're making progress. The thing with a spinal injury is you never know when that day comes where you won't progress any more. I think right now we're trying to utilize every day we can to get as healthy as I can.

“I'm working my butt off, doing everything I can, because my whole philosophy in life is the harder you work, the better results you'll get. Make sure you're the hardest working guy out there and you won't be beat. That's been my philosophy from Day 1 of my entire life, how my parents brought me up.

“That's my approach today. I don't know if it's right or wrong. There could be a person beside me with the same spinal cord injury eating fast food and sitting in their hospital bed all day, and they might walk sooner than me.

“The doctors know I'm working too hard, they're telling me to rest. By the same token, they're kind of telling me to keep doing what I'm doing because it's working. I am doing four to six hours a day, six days a week and it's tough. I enjoy my day off on Sunday!

“There's no real [knowing] why I'm getting the results I'm getting, or if I did more or less if it would change the results. No one really knows.

“The big thing for me is right now they always told me kind of the six to nine months or the six to 12 month frame is where you'll see the most progression. I'm kind of right at the beginning of that. Hopefully I didn't peak too soon!

“We're just a little bit over six months post-injury. I am getting a lot of improvement from week to week. I don't think it's really been escalating. I think it's been pretty linear. Every week we're making small improvements. Karli [Woods, fiancée] and I are documenting everything I can do at the start of each month. It's been remarkable to read back to see what I was doing February 1st to March 1st, January 1st. Every month it's a pretty consistent chunk of new things.”

Wickens said the support he’s received from fans at St. Petersburg, from team owner Sam Schmidt, and from well-wishers within motorsport has stunned him.

“It's been amazing,” he admitted. “I was expecting a lot of support, but it's already kind of gone way out of what I expected. I mean, heading to the pit lane for the first session, I thought the fans would kind of be more focused on the racecars, like I would have been when I was a fan attending a race. All they seemed to care about was me. Everyone was cheering my name.

“It's really cool to see team personnel from other teams just saying it's great to see me. Never even seen them before. It goes to show how great the IndyCar community is, how close it is, but then the fans are just fantastic, as well. Everyone is just giving me such an outpour of support. It's been fantastic.”

Wickens also praised his team owner, Sam Schmidt, who was rendered quadriplegic in a shunt at Walt Disney World Speedway in 2000.

“Sam's been super helpful throughout the whole thing,” said Wickens. “When the injury happened, he already knew the good doctors, the good surgeons. Before I would get to the hospital that I was going to, he already had vetted it for me!

“He was always making sure I would get the best care possible. He just knew so much because of his injury, because of his research and everything he's done with his paralysis. He's been to so many rehabilitation hospitals, that when that became a reality for me, he knew the ins-and-outs of every hospital, every rehab facility we were looking at.

“It's hard to put in words really what he's done. I think he did a lot that I still don't realize, because I was in a state that I wasn't able to realize what he was doing.”

Regarding the support from the rest of the motorsport community, Wickens said he had some awareness of what might transpire.

“I always knew that the motorsport world was supportive. I know I've always been supportive when a driver had an accident, even though you didn't know them. If there's ever that day where you read a fatal story, the outreach is always so good to that family.

“To be on the other end of that was something special. I haven't been home in Indianapolis since that day [of the crash] but I've heard through Karli, I've heard through the team, that there's cases and cases of mail waiting for us to open. The outreach was fantastic.

“From the motorsport world, all the drivers, big names, small names, every [social media] post I make, every progression I do, they're right there behind me motivating me, reassuring me that I can do it.

“Honestly, when those drivers kind of reach out to you, you want to do it even more. I think that's kind of the bigger thing: I want to finish this journey not just for myself but for the whole motorsports community. I don't want to fall short in any way.”