While the failure of the Toyota GT-One to win on either of its two Le Mans 24 Hours appearances is well-documented, its even more ignominious defeat on its final race outing at the hands of Nissan is often forgotten. Here's the full story of how Toyota lost the 1999 Fuji 1000km.

The Toyota GT-One is fondly remembered by sportscar racing enthusiasts as the car that best epitomised the excesses of the ‘GT Prototype’ era that defined Le Mans in the final years of the 1990s, despite its failure to triumph at La Sarthe in 1998 or 1999.

What’s less well remembered is the car’s third and final race outing, which came in early November 1999 at the Le Mans Fuji 1000km. This was a one-off event, and the first Automobile Club de l’Ouest-sanctioned event to be held in Japan. Its purpose was to gauge interest for a potential ACO-run series in Japan, following the template used by the inaugural Petit Le Mans in 1998 that laid the foundations for the American Le Mans Series.

However, despite the carrot of automatic entries for the following year's Le Mans 24 Hours being dangled in front of prospective participants, the race was poorly supported, even by the Japanese manufacturers. Toyota, which had already announced plans to exit sportscars and race in Formula 1, entered just one of its fearsome GT-Ones having run three cars at Le Mans. Likewise, Nissan fielded a sole example of its open-cockpit R391 prototype.

There were only three more cars in what was effectively the top class for LMP and LMGTP cars: a year-old BMW V12 LM co-entered by Dome and Team Goh, a Ford-powered Autoexe LMP99 (in reality a rebadged Riley & Scott MkIII) and an ageing McLaren F1 GTR fielded by Hitotsuyama Racing. Just four cars each were entered in the ACO’s GTS and GT classes, with the rest of the 23-car grid provided by the All-Japan GT Championship.

Not surprisingly, Toyota annexed pole much as it did at Le Mans earlier in the year. And when the 228-lap race got underway on a somewhat damp track, the GT-One duly sprinted away from the field in the hands of ex-Formula 1 ace Ukyo Katayama. Indeed, Katayama quickly established a buffer of some 20 seconds over fellow F1 alumnus Erik Comas in the Nissan, which was struggling getting its tyres up to temperature, in the first 34 laps. 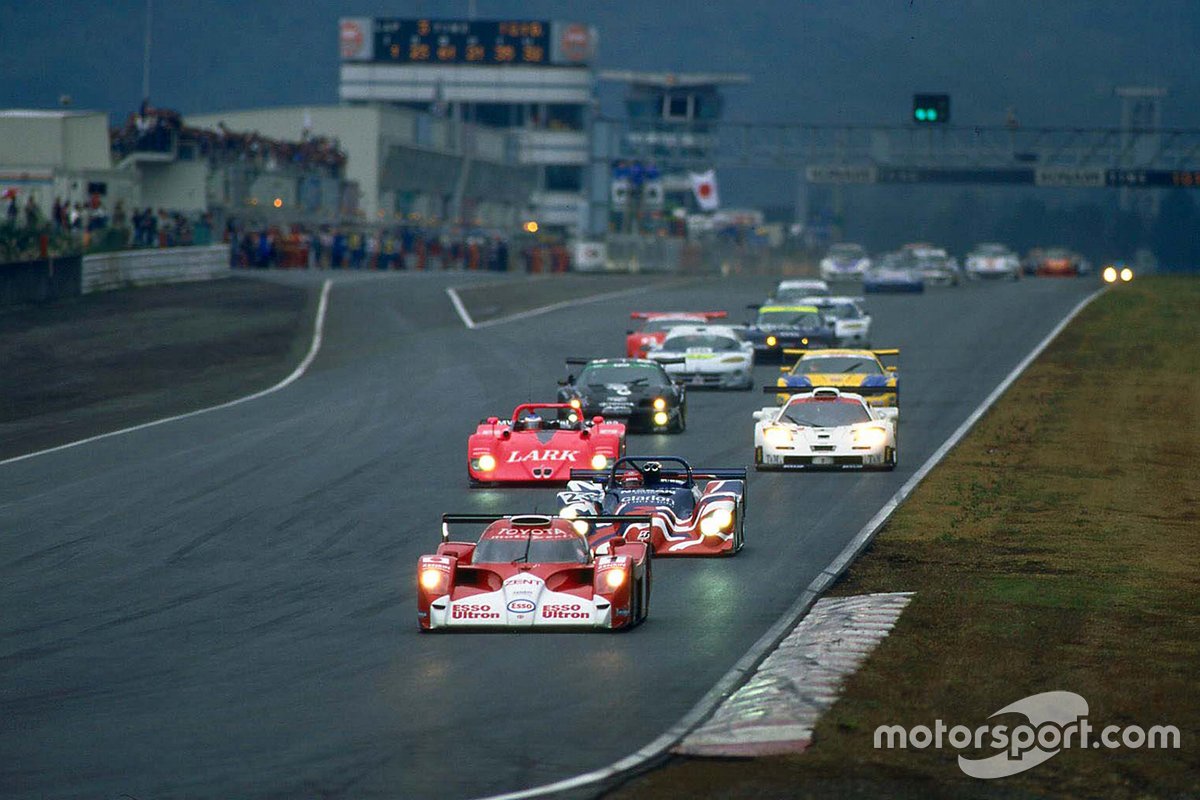 Despite being outgunned for raw pace, the Nissan was able to claw its way back into contention by way of double-stinting its Bridgestone tyres, whereas the Michelin-shod Toyota would change tyres at each pitstop. The cost of doing so was around 30 seconds compared to a fuel-only stop, setting up a potentially finely poised duel.

That meant Nissan was able to seize the advantage when Katayama brought in the GT-One for the first time to hand over to Toshio Suzuki, who rejoined some 13 seconds in arrears of Comas. Suzuki had got that gap down to just a few seconds when Toyota was handed a one-minute stop-and-go penalty, the result of Katayama passing two cars under yellow flags in his stint.

The upshot was that Nissan now had a lap in hand over the Toyota, although Suzuki was able to get back on the lead lap over the course of his stint before making way for Keiichi Tsuchiya. Meantime, Comas had handed over the Nissan to Masami Kageyama, who later made a fuel-only stop and rejoined with eight seconds in hand over Tsuchiya in the GT-One.

At this stage, the pace advantage of the Toyota meant it was still just about feasible for it to get back in contention with a trouble-free run, but then at the end of lap 126, after Tsuchiya made the GT-One’s third stop to hand back to Suzuki, the car wouldn’t fire up again. Almost three minutes were lost as the Toyota crew scrambled to change the car’s battery.

Now Nissan found itself with three laps in hand over Toyota, and able to stroke it home for the remaining 100 or so laps. Suzuki was able to get another lap back before giving the car back to Katayama for the run to the flag, by which point Satoshi Motoyama had taken the reigns of the dominant R391 from Kageyama.

On lap 187 the safety car was deployed in response to the Autoexe LMP99 grinding to a halt out on track, and both the leading cars took the opportunity to pit for a fifth time and eliminate the final ‘splash’ they would have otherwise needed to make the finish.

Upon the restart, Katayama set the fastest lap of the race for two laps in succession, before being called back into the pits to serve another penalty. This time the ex-Tyrrell and Minardi racer’s offence was overtaking the car in front before the control line at the restart, and although the penalty was only 20 seconds this time, another lap was lost. 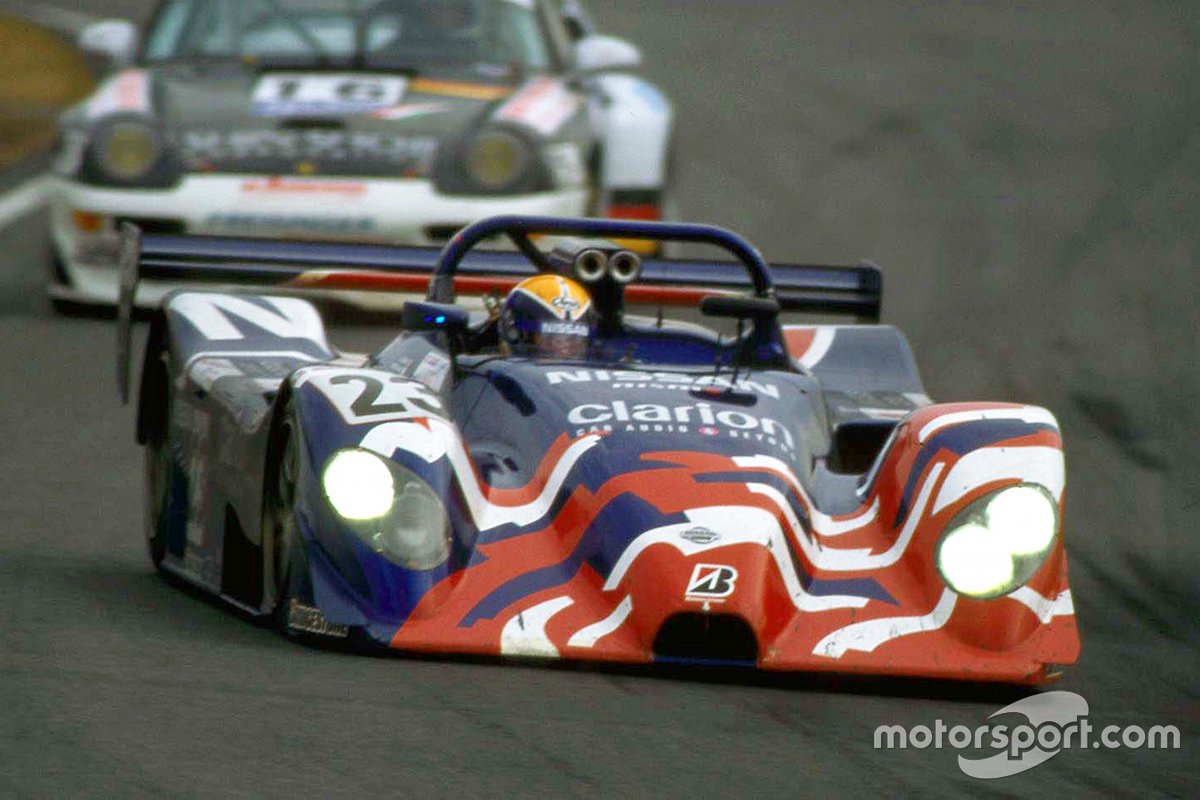 With the Nissan (now back in the hands of Comas for the run to the flag) not having to push particularly hard by this point, Katayama managed to get one of the two laps back in the closing stages and bring home the GT-One one lap in arrears come the chequered flag. The Dome/Goh BMW of Hiroki Katoh and Juichi Wakisaka was third, six laps behind.

Katayama was quick to assume responsibility for Toyota’s defeat, saying: “I made a silly mistake, I couldn’t see the yellow flag because the car was so low. And then I made a mistake with the start/finish line while I was trying to make up for lost time. I’m sorry that I spoiled the efforts of Tsuchiya-san, Suzuki-san and the whole team.”

While Suzuki said that it was “frustrating that we made it too easy for Nissan”, Tsuchiya defended Katayama, commenting: “When you are behind a Porsche or a Supra, you can’t see the yellow flags. It’s not Ukyo’s responsibility; when I was in the car and running behind the Porsche, I couldn’t see the flags being waved. They should be in a higher position.

“Then nothing could be done about [Katayama’s] start-line mistake, there was the battery voltage problem that cost us [over] two minutes, but especially Nissan did a great race.”

As Toyota was left to lick its wounds yet again, Nissan was able to celebrate its first major sportscar race win since its return to the top flight with the R390 GT1 in 1997.

Comas said: “The R391 has evolved tremendously since Le Mans in terms of both engine and chassis, we’ve made such good progress it’s not even comparable to Le Mans. Running a good pace while double-stinting the tyres, I definitely thought we could win.

“At the start it was wet, and having chosen the hard tyre I was struggling for grip until I could warm them up. But once it dried out I was able to do a lot laps, so it turned out to be a better choice than the soft tyre considering how the race played out.”

A second Fuji 1000km was scheduled for November 2000, but in April the race was cancelled. A press statement cited the cancellation of Nissan’s R391 project in early 2000 (a result of the firm’s restructuring under new CEO Carlos Ghosn) and major changes to the ACO rules, which meant it was “difficult to organise another event fitting of the Le Mans name”.

Regardless, had the race taken place, Toyota would have not been present, having shifted its full focus towards its 2002 F1 entry. The mighty GT-One would be retired without having won a single race of the three it entered, despite its obvious potential. 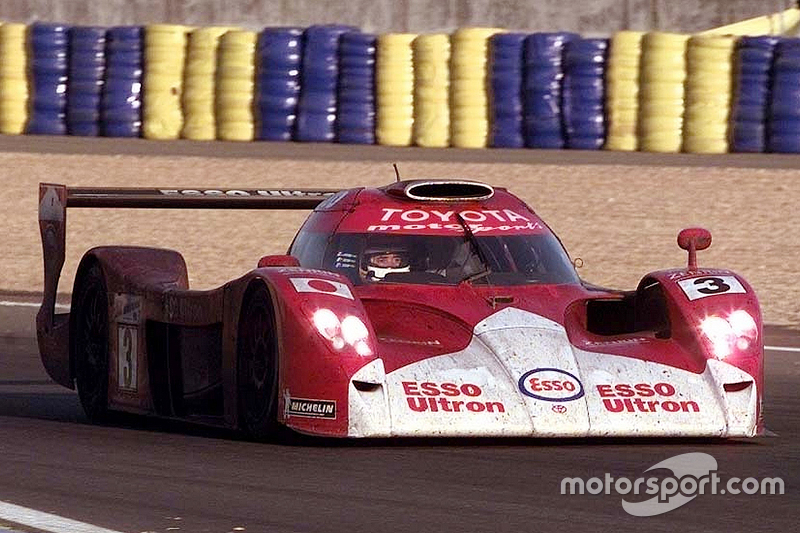 Toyota needs to run a third car at Le Mans