Jorge Lorenzo says he puts his crash in MotoGP's San Marino Grand Prix down to his choice of the "rock"-like medium front tyre.

Ducati rider Lorenzo was battling over second place in the closing laps of the Misano race with Honda man Marc Marquez, some distance back from dominant teammate Andrea Dovizioso.

But Lorenzo slipped out of contention for a podium finish when he lost the front end of his GP18 bike under braking for the Turn 8 left-hander with two laps to go, ultimately finishing 17th after remounting.

The Spaniard chose the conventional medium-medium tyre strategy for the race, like teammate Dovizioso, but was left to rue that decision as he said the medium front didn't give him enough grip under braking, ultimately leading to his fall.

"[The reason for the crash] was more to have to use the medium-medium that normally I don’t like, especially the front," recalled Lorenzo.

"With softer tyres I think I would have had something more for Dovi and Marc, but with the medium tyres, the pace was very similar for the three riders.

"I was going to 32-high, because before I didn’t feel comfortable, I was 33.1, 33.0. But these two keys, the obligation to choose medium-medium [tyres] made me not fast today, and also the fight with Marc.

"Just one degree more of lean angle, the front didn’t support my braking. So I think it was this, the impossibility to choose the soft front tyre that made me crash today and not go fast." 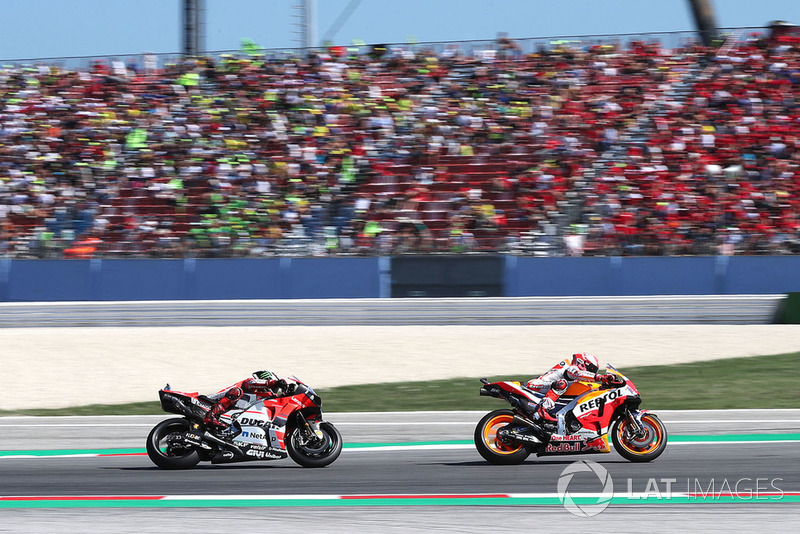 Lorenzo had unofficially topped the times during a private test at Misano last month, where conditions were similarly warm, but the Spaniard said the tyres were behaving very differently during the race weekend.

"It was very strange that one month ago with very hot conditions, the rear soft tyre was really constant, and this weekend the soft rear tyre was impossible to keep going," he remarked. "after five laps on Friday, it was destroyed completely. It was impossible to use it for any bike.

"The front, yes, I think we could use it, but probably [I didn't] because in the first lap of the warm-up I used soft and soft and the rear was not good, this also made on braking a bad feeling on the softs.

"Medium rear and soft front could have been a good option, but we’ll never know."