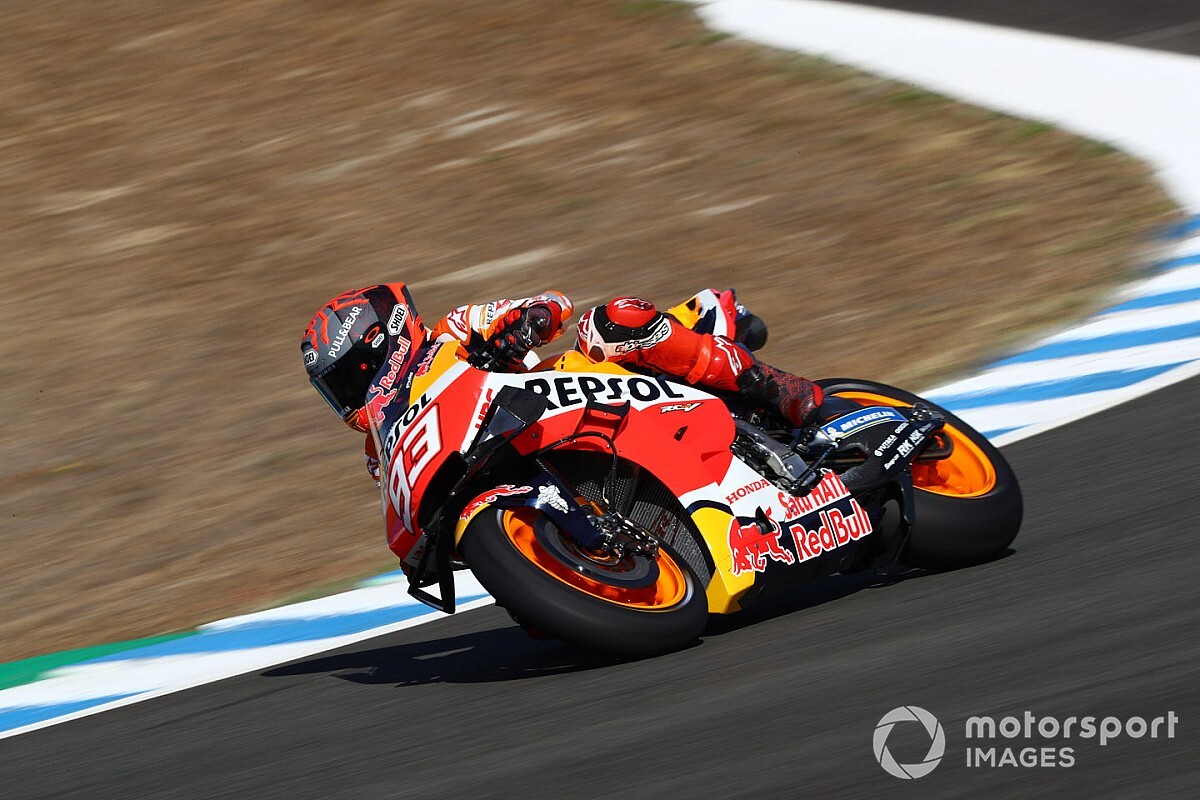 Marc Marquez topped the opening MotoGP Spanish Grand Prix practice at Jerez in a session in which the entire 22-rider field was split by 1.380 seconds.

The first practice session since November’s Valencia GP got off to a frenetic start, with top spot changing hands several times in quick succession.

Pramac Ducati’s Jack Miller set the benchmark pace on his first lap at a 1m39.673s, which was quickly toppled by Wednesday’s test pacesetter Maverick Vinales on the factory Yamaha.

The Honda rider’s follow-up lap was better than Vinales’, which moved him into top spot, before the Yamaha rider dipped underneath the 1m38s bracket with a 1m37.988s.

After 10 minutes of running, Miller had returned to the top of the standings with a 1m37.942s, which stood as the reference lap until the final five minutes.

Marquez began to light up the timing screens again as the session neared its conclusion, and duly registered a 1m37.350s to head the standings.

Despite another frantic salvo of laps in the final minutes, Marquez’s time went unchallenged, with Vinales ending up second with a 1m37.374s.

LCR Honda’s Cal Crutchlow leaped up to third late on ahead of Suzuki’s Joan Mir and Miller, with Alex Rins trailing him in seventh on the sister Suzuki.

Pol Espargaro led a trio of KTMs in eighth spot, with Tech 3 rookie Iker Lecuona impressively jumping up from last to ninth late on with a 1m37.714s lap just 0.002s outside of Espargaro’s.

Fellow rookie Brad Binder rounded out the top 10 on the second works team KTM, edging out the Avintia Ducati of the returning Johann Zarco and Petronas Yamaha’s Franco Morbidelli.

Valentino Rossi was almost eight tenths off the pace, down in 13th on his factory Yamaha, with Aleix Espargaro top Aprilia runner in 15th in a low-key session for the Spaniard following a strong showing on Wednesday.

Alex Marquez’s first official practice session as a MotoGP rider ended in 16th on the works Honda, with Fabio Quartararo frustrated at the end of FP1 after finishing up 17th.

Owing to a penalty for riding an illegal French Superbike Championship-spec Yamaha R1 at Paul Ricardo last month as part of training, Quartararo was forced to miss the opening 20 minutes of FP1 as punishment.

Ducati’s Danilo Petrucci was 21st as he struggled with a neck injury he picked up in his fast test crash on Wednesday.