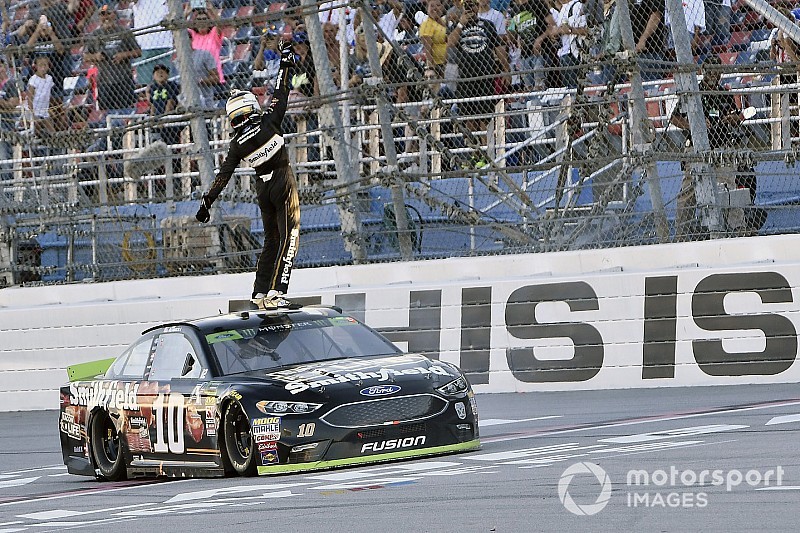 The ending didn’t go quite as Stewart-Haas Racing had planned but the result was just as important.

Aric Almirola took the lead on the final lap of Sunday’s Monster Energy NASCAR Cup Series race at Talladega when his Stewart-Haas Racing teammate Kurt Busch ran out of fuel, and hung on for his first victory of the season.

The win could not be more timely for Almirola, who is locked into the third round of the playoffs regardless of his performance next weekend at Kansas Speedway.

It’s Almirola’s second career win. He came within a lap of winning the season-opening Daytona 500 but was spun out by Austin Dillon.

"This is so awesome! It's Talladega! You guys are awesome," Almirola yelled to the fans after his win. "I've been so close so many times this year and this team, everybody believing in me, Tony Stewart, Gene Haas, (thank you) for giving me a chance.

"Four or five times this  year I feel like we've had a shot to win and haven't been able to seal the deal. To come here, a place that I love - I won an Xfinity race here last year - I just love racing at Talladega.

"I came to this track with the mindset that they we were going to race and give them hell. If we wrecked, we wrecked, and if we win, we win - and we won!"

The win ended his 149-race winless streak in the Cup Series.

Almirola also praised the team effort from SHR and Ford.

"There are 400 employees back at Stewart-Haas Racing. There are close to 200 employees at Roush Yates Engine shop. Thank you," he said. "This was an incredible race for us. We were so committed to each other and so organized, and nobody in the field could touch us. It was us against the field. What an impressive run. I'm just proud to be the one on top today."

Until the overtime, Kurt Busch was leading his three SHR teammates – Kevin Harvick, Clint Bowyer and Almirola – into a finish that would have been decided among themselves.

Following the break between Stages 2 and 3, the cars that had had pit before the stage break remained on track with Brad Keselowski leading the way when Stage 3 went green on Lap 116.

Shortly after the restart, Jamie McMurray was penalized for forcing Paul Menard for going below the double-yellow line.

On Lap 123, William Byron got a shove and moved ahead of Keselowski and into the lead for the first time.

On Lap 127 Keselowski made a power move on Byron to take the lead going into Turn 3. Logano follows his Team Penske teammate into second.

Kurt Busch moved up into second on Lap 130 with help from Harvick.

On Lap 137, McMurray hit the wall entering the tri-oval and drove into the infield grass, where his No. 1 Chevrolet came to a rest.

All of the lead-lap cars elected to pit for fuel and tires with Kurt Busch the first driver off pit road. He led the way when the race returned to green with 47 laps remaining, followed by Keselowski, Harvick and Ryan Blaney.

Led by Kurt Busch, the four SHR cars soon got together in the bottom line and tried to break away from the rest of the field.

With 40 to go, Kurt Busch remained out front of Harvick and his SHR teammates with Menard running in fifth.

A tire got loose during a pit stop and ended up in the infield grass which forced NASCAR to call a caution on Lap 160. Some of the lead-lap cars elected to pit for fuel – many needed to make it to the finish.

Kurt Busch continued to lead the way followed by his three SHR teammates on the restart with 24 laps to go.

With 20 laps remaining, Kurt Busch continued to lead the way with the only change up front being Bowyer moving into the second position.

The SHR group remained unchallenged with 10 laps in the race.

With three laps to go, Alex Bowman hit the wall to start an incident that also collected Byron and J.J. Yeley. That sent the race into overtime.

On the two-lap restart, Kurt Busch led his two SHR teammates as Harvick, Keselowski and Blaney were forced to pit as they were low on fuel pressure.

Harvick holds off SHR teammates for Stage 2 win at Talladega