The four-time champion ran near the front most of the race and shot into the lead on the 254th lap when race dominator Kyle Busch pitted for fuel and tires. Until that point, Busch had led 191 laps but with the stop, he was not able to get back to the front.

I thought ironic it was that we finished first and second.

Said the victor, “This is a big one for us. We’ve been close here before but today we did all the right things to end the season like we did. I am most excited about winning for DuPont. We carried a special 20th anniversary DuPont paint scheme and seeing them beaming all over when we pulled into victory lane was special.”

Gordon thought the victory would help offset the tribulations experienced a week ago. “Our whole season was wrapped up in one week,” Gordon said. “It ate me up inside as to what I had done. I was disappointed, angry, questioned whether I was right or wrong, and it just ate me up. Before the race, I apologized to the team and I told them I didn’t mean to get them involved. To be able to celebrate with my team in victory lane was special and it gives us momentum going into 2013.”

During the race, Gordon raced hard with Clint Bowyer and at one point Joey Logano was alongside. “Alan (Gustafson) told me at one point that I was racing with Bowyer,” he said. “We came into some lapped traffic, and I could tell he was running hard. I raced with him a couple of times but there were no issues. It didn’t matter who was behind me, as I wanted to win the race. We just tried to focus on our car but after it was over, I thought ironic it was that we finished first and second.” 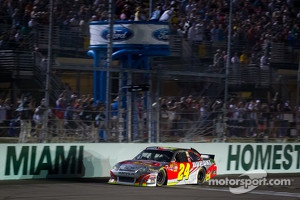 Said Rick Hendrick, “Our goal is to win every race that we can, and our cars ran well today. Jeff had the fastest 10 laps in practice, and he had the bit in his mouth today. It was a great day for us and for DuPont.”

The congenial owner congratulated Roger Penske for winning the championship and he indicated they are the best of friends. The two men exchanged hats in victory lane.

Crew chief Alan Gustafson knew he had played it close on fuel but thought the car was good for at least one more lap. Regarding the outcome, he said, “It was a really good race for us, and it was a good race with a solid car. Our last pit stop was the pivotal one for us.”

Bowyer powered the 5-hour Energy Toyota to second place a mere second behind the victor.

“My race started out good until we had some problems in the pits, which seemed to be catastrophic,” Bowyer said. “I knew I had to beat Kasey Kahne and get us back to second. This has been a great year, and I am excited how far we have come in my first year with Michael Waltrip Racing. I think we will be even better next year.” 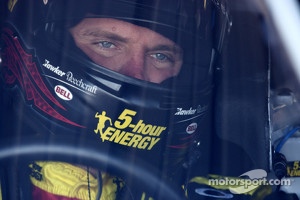 Asked about his joust with Gordon a week ago, Bowyer didn’t seem to want to talk about it but did say more or less in jest, “I really wanted to catch the No. 24, at least it went through my mind and possibly the minds of others.”

Ryan Newman came from the 19th starting position to take third place. He drove the U. S. Army Chevrolet.

“I am really proud of my guys,” Newman said. “We had the right strategy and track position and I am proud to give the U. S. Army a top-five finish in their last race with us. This is a good way for us to end the season.” 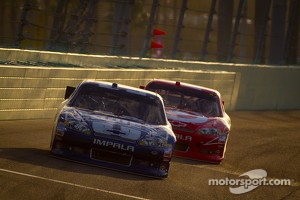 Brad Keselowski ended up 15th, which was good enough to seal the season’s championship.

Hard-luck driver of the race was Jimmie Johnson, who held the lead on the 213th lap until a miscue in the pits and a subsequent gear failure sideline him. He was scored 36th.

Keselowski, Johnson set to duel for 2012 Championship at Homestead