In only his 13th start, Team Monte Carlo driver Jimmie Johnson scored his first career NASCAR Winston Cup win at California Speedway, his hometown track. Behind the wheel of the No. 48 Lowe's Chevrolet for Hendrick Motorspsorts and car owner Jeff ...

In only his 13th start, Team Monte Carlo driver Jimmie Johnson scored his first career NASCAR Winston Cup win at California Speedway, his hometown track. Behind the wheel of the No. 48 Lowe's Chevrolet for Hendrick Motorspsorts and car owner Jeff Gordon, Johnson led four times for 62 laps and crossed the finish line with a 0.62 margin of victory over Kurt Busch. Johnson who is the current Raybestos Rookie of the Year point leader, moved into 5th place in the current Winston Cup point standings. 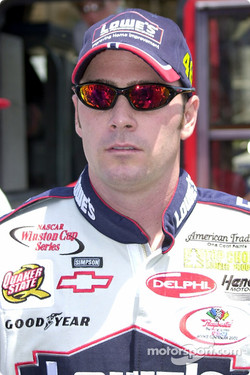 "This is unbelievable. To be this competitive in Winston Cup racing has been a dream of mine and I just can't believe it came true. It's just so special to win in my own home state and in front of all my friends and family. It's just incredible. Thank you California.

"We were really loose at the start of the runs and as the tires got older, the car got better and better. We were going to go for two (tires), but we saw some guys earlier that just took gas only and beat us out of the pits. Chad (Knaus, crew chief) made the call for gas only and I was able to hold those guys off. Track position was the key. I just tried not to let them line up behind me and draft down the straightaways and take the line in the corner and we were in good shape."

On having enough experience to hold off Ricky Rudd?

"I knew it was going to be tough. But I raced with Kurt Busch all day long. I thought he might be able to march up through there and get to us, but he got held up with Ricky Rudd a little bit and we were able to bring this Lowe's Monte Carlo to Victory Lane."

Are you surprised to win this early?

"Heck yeah I am. This is unbelievable. You always think you have the ability to come out here and be competitive, but you just don't know until the right situation presents itself and you can showcase your talents. My hats off to Chad Knaus. We're both in a similar situation of trying to prove ourselves. He's doing an awesome job and the same with all these guys here in Lowe's uniforms.

"When you get in this situation, you'd have something to say, but you have nothing to say. You're just stoked."

When did it occur to you that you'd actually won?

"Coming to see the white flag I got the goosebumps running all over my body. The cool down lap was really great to see all those guys giving me the thumbs-up. And then Jeff Gordon came up and started rubbing donuts on the right side of your car. That's when it all started to sink in."

On his victory donuts.

"At first, we had this discussion where we wanted to do a burn-out in reverse. And I tried that and I blew the transmission out of it. And then I was doing the donuts and I burned the motor up. So it was just a bad last five minutes there on the race track, but I wanted to do some donuts and boil the tires off this Chevrolet."

On showing his hometown fans how it's done?

"I'm from El Cajon, California and grew up there racing motorcycles and off-road. I always dreamed of racing in the bigtime and here we won in our own home state."

What did Jeff Gordon tell you in Victory Lane?

"We were just all happy and proud. This team has been able to come together and win one this early."

Did you think a win would happen this quickly?

"No. Our goals at the beginning of the season were just to finish in the top 15. We've been maintaining those goals pretty strongly. We actually had a couple of other opportunities to win some races and we were able to pull this one off. They did a great job. I have a great group of guys.

"I really wanted to win a race. It was kind of neat the way it happened you know, working with Ray (Evernham) when we got our first win for the No. 24 car (Jeff Gordon). We took two tires there at Charlotte and he pulled off his dream of getting his first Winston Cup win. We did it with no tires and just fuel. To pull it off was pretty special."

On the pit strategy.....was this a big decision?

"Oh, as soon as I did it, Mr. Hendrick was sitting next to me and I said, 'You've got to let me down, I'm going to go throw-up. I was extremely nervous. I saw those guys putting on tires and I had my spotter up on top telling me what those guys were doing and when Jimmie was almost half-way down pit road he told me they were taking two tires.

"But the car was balanced good. And once you get out front, if you have a good balanced racecar, you can hold those guys off. We've got the best group of guys in Winston Cup right now. We are coming up strong. They're intelligent they're experienced and they're exuberant. I'm just so excited for these guys."

On the younger up-and-coming drivers.

"Kurt Busch, Ryan Newman, Jimmie Johnson, and some of these younger guys have come into some tremendous equipment and experienced teams with some knowledge and background --- people that they can feed on. On fortunate thing for us is that we've got Jeff Gordon and Robbie Loomis and those guys to feed on and that's nothing but a bonus for us. It doesn't surprise me in the least little bit. I knew we could do it (win) and I know they can do it as well. It's going to be a tough year."

"I'm really proud of these guys and thankful. You see it all come together with all the people and all the hard work and Jimmie was certainly a big part of it. I tell you, I couldn't be more thrilled. I'm kind of in shock like Jimmie is, I guess right now at just 10 races into the season.

"If you would have asked me last year, I would have said we would have to be patient and that it would take a while and you just never know. I do know that Hendrick Motorsports has best race teams and resources out there. The No. 24 DuPont Chevrolet team has contributed this Lowe's team come along. But these guys went out there and did it we're happy for Lowe's too. We're happy to get them a win here and we're looking forward to many more.

"I never doubted him. I drove against him in the Busch Series. I saw him hanging that thing out and it looked to me that he was getting an awful lot out of the cars he was driving. So I knew if you put him in good racecars in Winston Cup that he'd do a great job over here too. I think he'll be the first one to tell you that you've got to have the right people behind you and the right car underneath you. You can't do it on your own. And you've got to have the right driver in the seat and he's certainly the right guy."

On winning the inaugural race at California Speedway and now Jimmie Johnson's first career win at the same track.

"I think there just couldn't be a better place for him to go to Victory Lane. He's from southern California and has a lot of people out here pulling for him. We've got some similarities because we both come from California. We both have a dirt track background. Maybe his is more sand than dirt.

"But he's just a good guy. He's a great guy to have on your team as a teammate. He works so well with people and he can drive the wheels off the thing. I don't know if that's a similarity to me, but if it is, it would be a compliment to me."

On being such a young and successful team owner?

"It feels awkward. I feel like I don't belong there (in Victory Lane). But Rick (Hendrick) and I worked hard to get the sponsorship and Hendrick Motorsports worked hard to put this team together and it's just neat to see it all working out the way it is. The chemistry on this team has been right there from the beginning. Jimmie and Chad and the team have just clicked. It's just awesome."