Joey Logano on tire rule change: "NASCAR had to do something" 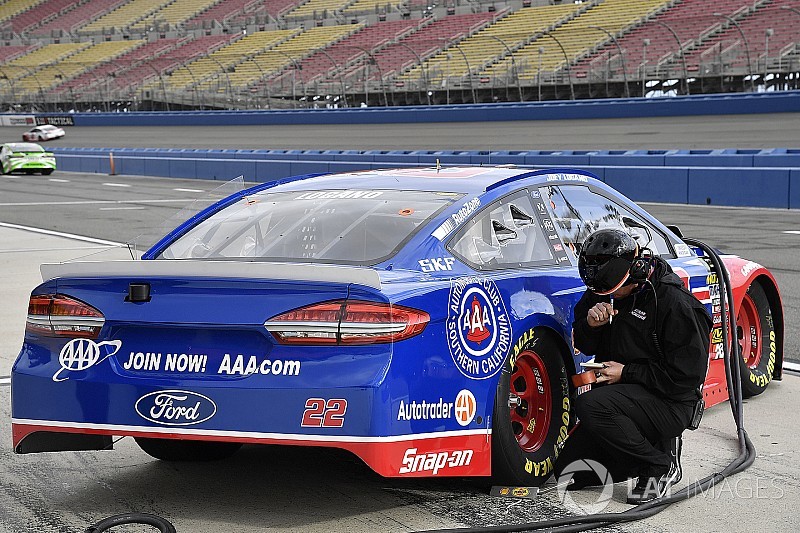 Nobody likes to see NASCAR officials change the rules on the fly, but Joey Logano says competitors left them no choice this weekend at Auto Club Speedway.

When 13 cars failed to clear pre-qualifying inspection on Friday in time to get on the track, it produced an interesting quandary.

Because of NASCAR’s rule that you must start the race on the tires with which you qualified, the cars that did not participate in qualifying were going to begin Sunday’s Auto Club 400 on stickers tires – a distinct advantage on the track’s abrasive and worn-out surface.

Hours after the session had completed, NASCAR offered those teams that qualified a chance to purchase a new set of tires on which to start the race.

“NASCAR had to do something there. Last year, we did not get through tech here before qualifying and we started 37th. We were 11th three laps into the race,” Logano said Saturday after winning the Xfinity Series race.

“You can imagine starting 25th on brand new tires – you’re going to be racing for the lead four laps into the race, if it takes that long. I don’t think cars that don’t make it through tech should have an advantage on the field. It’s kind of backwards on what it should be.”

Saturday morning before Xfinity Series qualifying, NASCAR got ahead of the issue, stating that any Xfinity teams that failed to clear inspection and participate in qualifying would have to make a pass-thru penalty on pit road after taking the green-flag for the race.

While it has not officially said so, it appears likely NASCAR will utilize that rule in all series going forward.

If that’s the case, Logano for one applauds the move.

“That’s a huge penalty. It’s huge,” he said. “That’s plenty to make sure everyone gets through and gets on the race track. I may regret saying this someday, but I think it’s a good idea.

“We’re all competitors. I’m not blaming anyone for doing what they did. We even thought about doing it. It makes sense to play the game that way. It just doesn’t feel right and that’s why we didn’t do it, but I understand why people would do that.”

The problem with inspection issues has always been about optics more than anything else – fans don’t tune in on TV or attend in person to see drivers not participate.

“I think that’s important that NASCAR does something to prevent that from happening and they made it right this time.”