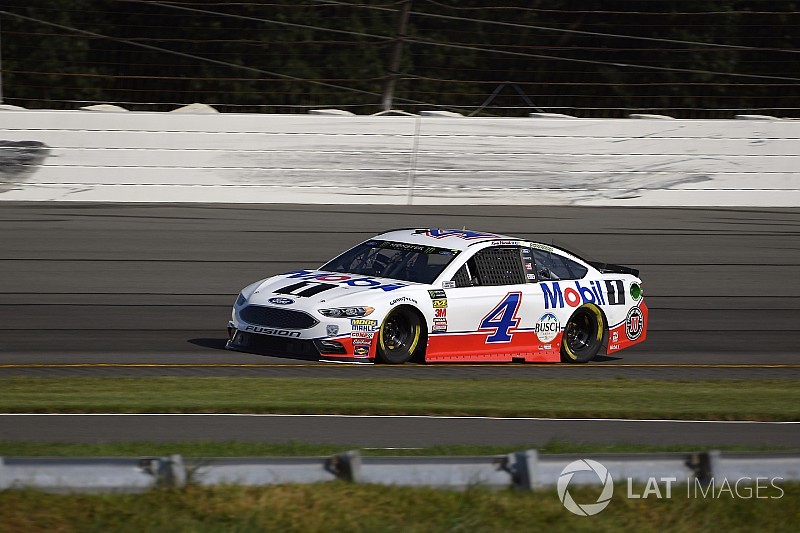 Kevin Harvick, who started the race from the back of the field, easily held off Chase Elliott for the Stage 2 victory at Pocono, his 10th stage win of the season.

Following a round of pit stops between Stages 1 and 2, Erik Jones and Martin Truex Jr. stayed out as they both pit right before the stage break. Chris Buescher had to take his No. 37 Chevrolet to the garage for a transmission change.

Jones and Truex lined up first and second, respectively, on the restart on Lap 57. Kurt Busch lined up third, Elliott fourth and Daniel Suarez fifth.

Truex had trouble on the restart and dropped back to fourth as Elliott moved up to second and in position to challenge Jones for the lead.

On Lap 62, Harvick was able to move around Elliott and into the second position.

Two laps later, Harvick caught Jones between Turns 1 and 2 and ran him down to take the lead for the first time in the race.

“I’m just tight,” Jones told his team over his radio.

With 33 laps to go in Stage 2, Kurt Busch was the first car to short pit. He had taken just two tires on his previous stop and was falling back in the field.

Denny Hamlin followed him down on Lap 74. Larson pit on Lap 75 and it appeared most of the rest of field were set to begin their green-flag pit stops to make it to the end of the stage on fuel. Harvick pulled down to make his stop on Lap 78.

On Lap 83, Corey LaJoie hit the wall hard in Turn 3 to bring out a caution. He was reporting brake problems before the incident. “I told you this thing had no (expletive) brakes,” LaJoie told his team over the radio.

During the caution, the drivers who had not yet made their stop elected to pit. On the restart with 14 laps left in the stage, Harvick resumed the lead followed by Elliott and Jones.

Elliott made a charge on Harvick for the lead on the restart only to see Kyle Busch move past him and into the runner-up position.

With 10 laps left in the stage, Harvick held almost a one second lead over Kyle Busch. They were followed by Elliott, Jones and Hamlin.

Harvick opened up a nearly two-second lead over Kyle Busch with five laps left in the stage.

Kenny Irwin, Robert Yates to Part at End of Season