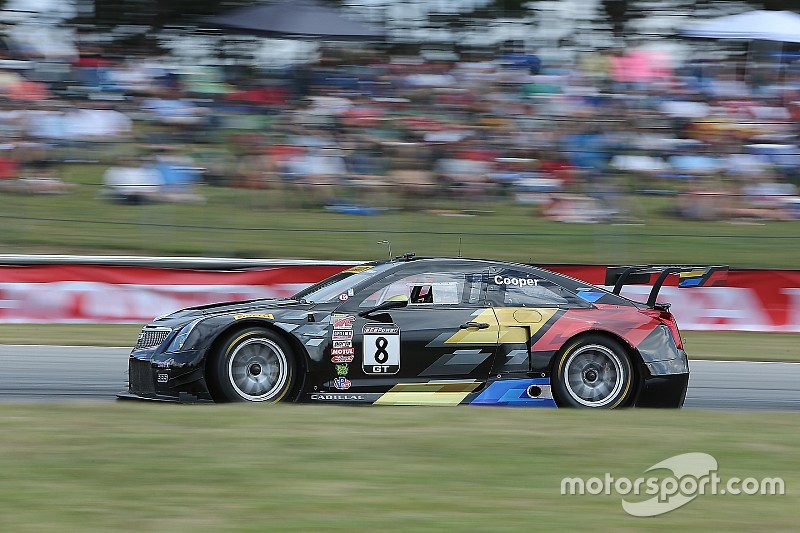 Cooper grabbed the lead at the start of the race, with Eversley following him past the polesitting McLaren 650S of Alvaro Parente, while Parente’s teammate Austin Cindric also got shuffled back behind Johnny O’Connell’s Cadillac, and Bryan Heitkotter’s Nissan GT-R. Cindric also fell behind the Gainsco Racing McLaren of  Jon Fogarty, an issue he somewhat clumsily addressed at Turn 4 which pushed Fogarty onto the grass and dropped him to ninth.

On Lap 7, World Challenge race control ordered Cindric to fall behind the #99 of Fogarty, dropping him to ninth. Mechanical issues would later end Cindric’s race altogether.

The other McLaren of Parente meanwhile kept around four seconds behind the Cooper vs Eversley battle up front, which saw Cooper’s lead threatened several times, particularly when encountering traffic. By lap 20, though, Parente was closing up on the lead pair, and by lap 26 the top three were equidistant, 0.8sec apart.

However, Parente threw his chances away by trying to lap the GTA Porsche of Preston Calvert around the outside of the final turn and bumped through the grass for half of the front-straight. He would come in to get the McLaren’s radiator ducts cleared out, but fell a lap down.

Over the closing stages, Cooper edged away from Eversely to the tune of 1.6sec, while new third-placed man O’Connell was a further six seconds behind at the checkers.

Some 2.5sec behind the second Caddy were the Nissan GT-R of Bryan Heitkotter, leading teammate JD Davison home by 1.5sec.

Michael Lewis was a very distant sixth in the first of the Porsche 911s, holding off Fogarty’s McLaren which came under intense pressure from the second Acura of series newbie Spencer Pumpelly, who set fastest lap on the penultimate lap. Lewis’ teammate Pat Long was ninth, while Adderley Fong got it wrong while chasing Long and went off at Turn 1 in his Bentley but held on to the place to clinch 10th.