After the first four rounds, Hargrove now has a commanding 43-point lead over Wyatt Gooden in the driver’s championship point standings (122-79). 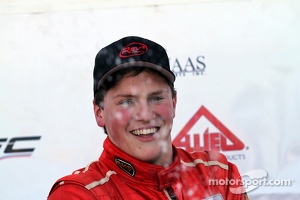 In Round 1, Canadian Hargrove started his No. 38 machine on the pole position, his third of the season. American Neil Alberico, driving the No. 2, started second, No. 32 driver Dutchman Jeroen Slaghekke started fourth and Englishman James Fletcher, piloting the No. 3, started seventh.

In an eventful opening lap, Hargrove took the green flag, never looked back and led all 21 laps. Unfortunately it was not an easy day for the Alberico, Fletcher and Slaghekke. In the opening lap, Alberico and Slaghekke made contact in the first turn.

Alberico’s day ended there, while Slaghekke finished 17th and two laps down. Fletcher looked to be having a good race, but contact with a National class car resulted in a cut tire. He finished 15th.

In Round 2, Hargrove again started in the pole position and led all 21 green-flag laps to claim his third win of the season. Fletcher was able to steer clear of trouble and worked his way up to the 8th position after started 10th.

It was another unfortunate day for Alberico as he was brought into the pits at the end of the pace lap with a braking problem. After starting in the back, he finished in the 20th position. In the battle for the podium, Slaghekke, who started the race fourth, worked his way up to third. After making contact with another car on Lap 19, his chances for a podium were dashed, and he finished 23rd.

“It was a good and bad weekend for us,” said team owners Dominic and Nicholas Cape. “We are thrilled with Scott winning both races.

There were some unfortunate incidents that affected the performance of Neil, Jeroen and James. Obviously we want to see all our drivers on the podium, so all we can do is get back to the shop and get ready for Indy.

Our drivers have done quite well at the Lucas Oil Raceway, so we are expecting good races from all four of our guys.”

After the first four rounds, Hargrove now has a commanding 43-point lead over Wyatt Gooden in the driver’s championship point standings (122-79). Alberico, who has one win this season, is 11th, Slaghekke is 15th and Fletcher is 17th. In the team standings, Cape Motorsports is first with a 34-point lead.

The team and drivers will have a break before the “Night Before the 500” race on May 25. This fan favorite race is held at Lucas Oil Raceway, the night before the Indianapolis 500. Cape Motorsports drivers have won this race the past three years.

Alberico: The rising star who relearned his craft

Road To Indy open test to feature over 40 entries