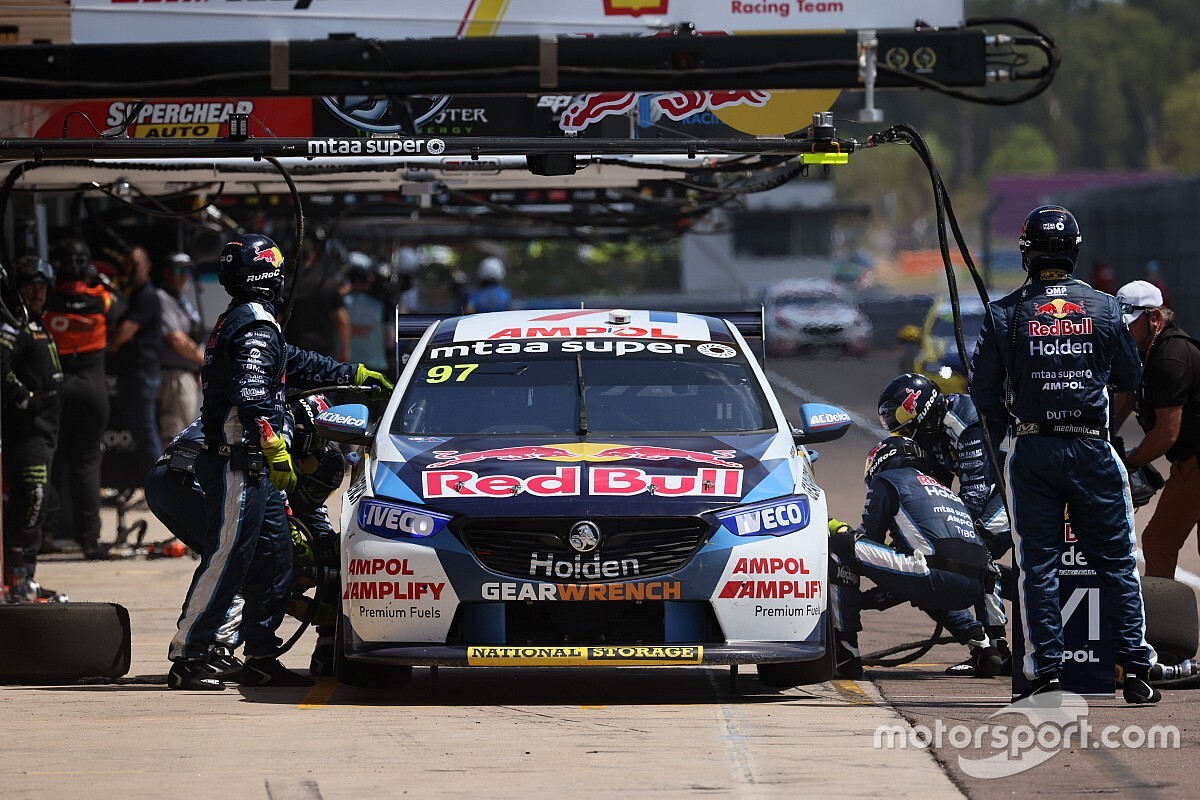 The series has used both the soft and hard compound Dunlops at the last two events, with a limited allocation, particularly of the soft, effectively forcing drivers to pick and choose between races.

Lower tyre degradation in Darwin last weekend meant tyre condition was less influential than it was in Sydney, however the rules did still help Anton De Pasquale to a first win on the Saturday, the Erebus driver joined on the podium by James Courtney and Scott Pye.

While undoubtedly fascinating, the rules have divided paddock opinion with some claiming the racing is too contrived.

Star driver-turned-TV pundit Murphy is having none of that, however, the four-time Bathurst 1000 winner telling the Parked Up podcast that he's a big fan of the new rules.

"The guys that dominate every single weekend, they're not going to be overly happy with it because they're not able to gather as many trophies," said Murphy. "They probably feel that it's being manipulated a little bit.

"But sitting at home, and if I take off my work hat and my involvement with Supercars, I think it's fantastic. I'm a huge advocate. I've been a huge advocate for change for a long time.

"Anyone involved in the sport knows that we needed to be changing the way that we go about our racing, reducing the costs, spreading the love a bit more...

"Everyone has the same opportunities to do these things during these races, it's just how you plan it. It's not like we're falsifying results, we're creating opportunities for people to choose.

"It's giving other guys the chance to have their day in the sun, and that is so critically important for the future of our sport moving forward.

"I'm a huge fan. I've been relishing it. I've been really excited about who's going to do what, because it leaves everything open to different interpretation. And therefore you're getting different results.

"And that's what we need to grow the sport and continue to getting more people wanting to be involved. It's great for television, it's great for selling advertising.

The mixed compound rules will now be shelved for the next three events at least, with this weekend's second Darwin round, and both legs of the Townsville double-header, set to revert to a limited soft tyre allocation.

Based on last weekend's action, the 20-tyre limit is unlikely to pose a big problem for the top teams for the three races.

That, says Murphy, is why the category needs a more aggressive soft compound tyre.

"Sydney Motorsport Park delivered because we know it's such a high-deg race track. We know Darwin, the surface there is really, really good and it wasn;'t going to provide that deg," he said.

"In that respect, okay its didn't quite work the way it has done. But it's still an improvement on what we've had with domination from a couple of race teams.

"It highlights the [need] – and I know it's been talked about, I don't know if it's been tested yet or not – to have a much higher-deg soft tyre that provides the outright pace, but makes that degradation side of things come into play. That's something we need in our arsenal."

Murphy also backed the move to a control damper and a limit on data-logging, the Kiwi adamant a control front upright – heavily mooted to be part of the Gen3 package – needs to be next.

"I've been a big advocate for reducing a whole lot of items that are still open for interpretation, open for development," he said.

"You can see what a control damper being thrown at these cars has done. It's done next to nothing, as far as speed and all that kind of stuff [is concerned]. We know the likes of Triple Eight had a bit of a whinge and moan about it at the beginning of the year, and they had a broken suspension arm on [Shane van Gisbergen's] car at Adelaide, but that was the only car that did have it, everyone else got through it pretty well.

"You expect people to have a bit of a whinge here and there, who's affected worse by it. But as far as speed goes, there's hardly a change. Cars are going as fast, if not faster, than they've ever been before.

"It proves that that kind of stuff is completely unnecessary. We don't need to have teams spending copious amounts of cash getting confused and developing those areas of the cars.

"There's plenty of items. We've got to get rid of sensors in the cars. The teams will argue, some of them black and blue, but it's only because they get a benefit out of it. And others don't get a benefit.

"It's not going to become a one-make series, we've got too much intelligence in there and we've still got bits and pieces that generate the ability for teams to work and analyse and do things. But we've got to make it cheaper. We're not going to take away from the category, we're just going to add to it.

"Look at MotoGP at the moment. When have we last seen a category that is delivering the way that is? They've controlled things. We need to have guys qualifying 13th or 14th and still having a chance at winning something."