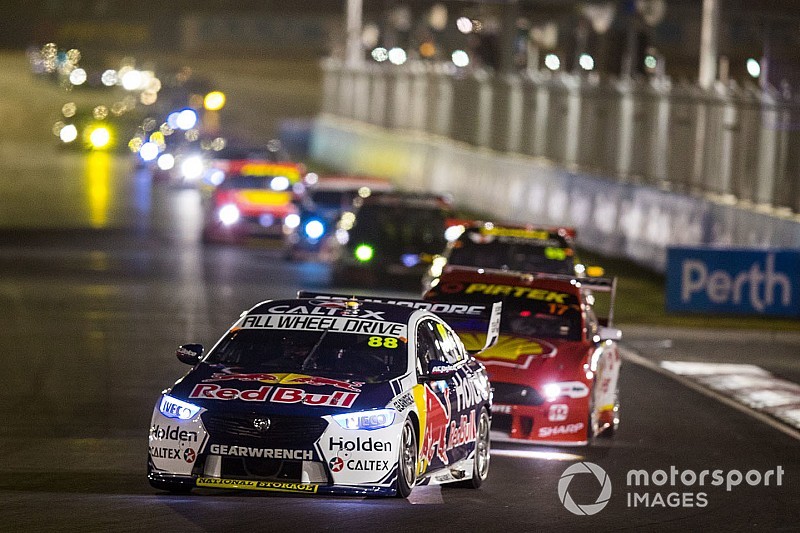 Whincup was in the frame for a first win of the season during last Saturday's 200-kilometre night race, after qualifying on the front row and beating polesitter Scott McLaughlin to the first corner.

The Red Bull Holden driver led the way through the first stint, before McLaughlin made his first stop on Lap 17 in a bid to undercut his way into the lead.

Rather than responding to McLaughlin and bringing Whincup straight in, Triple Eight elected to leave the seven-time series champ out until Lap 25.

The move protected second place for Whincup, but gave McLaughlin a free passage to an eighth win of the season.

According to Dutton, not covering McLaughlin was a deliberate decision rather than a strategic blunder. Looking to bounce back from a tough Phillip Island round, Triple Eight wanted to focus on locking down a much-needed podium, instead of gambling on a win.

"It’s an interesting one. It’s a really tough one to know exactly what to do there, because clearly you want to come out and win every race," Dutton explained.

"When you’re starting on the front row, you definitely know you can win. Jamie got a good start, as he usually does, and Scotty couldn’t get past.

"But we were still, it might sound a bit boring, being very realistic, and making sure we did all the fundamentals right.

"We didn’t want a hero-zero move, that wasn’t the plan.

"So we went with maybe a slightly conservative approach, but it was where we needed to be. Not just to secure a good P2 finish, but to also make sure we’re learning maximum from the car.

"It was the right thing to do in this instance.

"What would have happened if we’d run the strategy different? Who knows.

"The conservative [move] is that we let [Scott] under-cut us. We could have responded and dropped out in front, especially in these minimum fuel races, you can choose that, but if we made sure we did that, would we have exposed ourselves to other people, gone for the P1 and ended up P5.

"We didn’t do the Hail Mary throw. We played it a little bit sensible, a little bit conservative, but wanted a really solid finish."

Dutton added that the conservative approach is a byproduct of what is an ongoing pace deficit to the Mustangs, particularly the DJR Team Penske run ones.

"We came here with the goal of being P3 and we got P2, so we over-achieved," he said.

"It does still hurt saying P2 is over-achieving, but that’s where we’re at right now and we’ll keep working hard to make sure that’s not over-achieving in the near future."

Overhauling that pace deficit, however, is not something Dutton and his team are underestimating. He says it'll be a "tough slog" to catch the Penske Mustangs, but that there were at least positive signs in Perth.

"We need to make sure we’re totally happy with the job we’re doing. We were much happier this weekend, but even in our own cars with the balance and the feel, there were still improvements we could make to give the drivers exactly what they wanted.

"We know [in Perth] there was more in us, so we can bridge that gap even further.

"[Penske] might be saying the same things, you never know, but we know for ourselves, we produce very good cars for both drivers. It was more that we weren’t able to unlock what we think we can with the current package.

"Earlier in the year there was some times when we were doing a cracker job and we were a second off the pace.

"Right now that’s not the case. If we keep improving and they stop improving, hopefully [they can be caught], fingers crossed.

"It’ll be a tough slog, but we’re up for the challenge."