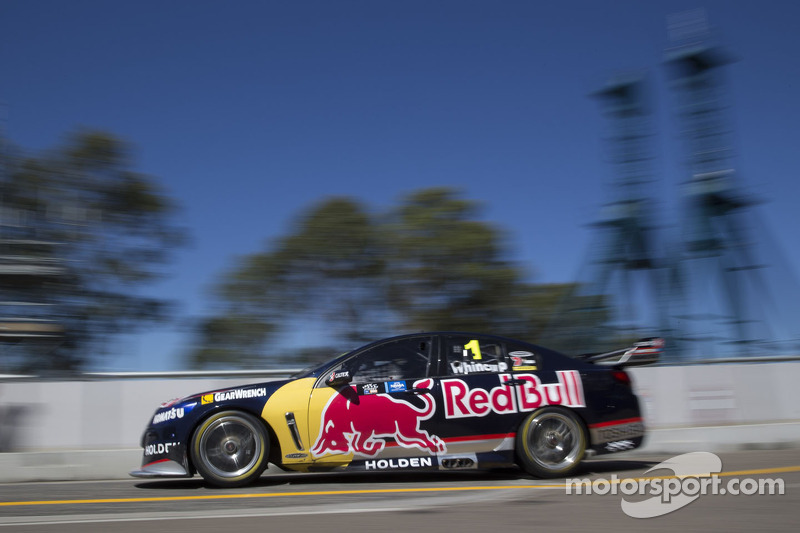 Jono Webb took the lead from the start, but Whincup was through early in the race and from then was rarely headed. Behind him, there was chaos. Jono Webb finished an excellent second (although there was confusion for much of the race, his transponder seeming to be giving trouble – he’d be 25th one lap and 3rd the next).

By lap 20 of the 74, few cars had much in the way of straight bodywork. Mark Winterbottom and Craig Lowndes had made contact, Lowndes half-spinning and Winterbottom being hit by David Reynolds. Alex Davison spun in sympathy, meaning three of the four Ford Performance Racing entries were involved. Race officials decided to have a long, hard look at this after the race.

Lowndes had to make an extra pit stop to repair damage, leaving him 15th at the end.

Later, Winterbottom was in the wrong place at the wrong time, when Tony D’Alberto bounced off wall in front of Winterbottom, ending the Championship contender’s race.

James Moffat and Scott Pye made contact, resulting in a pit-lane drive-through for Moffat. On the final lap, fourth-placed Shane Van Gisbergen dive-bombed third-placed Fabian Coulthard, leaving the latter hanging off the concrete. More may be heard of this later, but for now, Van Gisbergen is third. Given that he and Webb are team-mates, this is an excellent result for the small team. It’s been rumoured that Webb (owner of the team) will step back from driving due to budget constraints. Coulthard limped around to be 19th at the end.

Van Gisbergen said “I was well up the inside but he kept coming across at me. You have to be aggressive at races like these [on street circuits]”. Van Gisbergen had been forced to wait while Jono Webb pitted ahead of him under a Safety Car and dropped back in the field – as low as 11th at one point. Clearly his was a very good drive, although he’s under a couple of clouds, as there was another incident earlier on.

But Jamie Whincup’s drive was superb. A classic example of ‘keeping your head while those about you are losing theirs’. Only headed for a couple of laps at the start and during pit stops, Whincup has virtually sewn-up his fifth Championship, putting him in illustrious company. If Lowndes wins tomorrow, Whincup only has to finish 18th or better.

Two of the three AMG C63s failed to finish, but Tim Slade, in the surviving car, finished 8th. Best of the Nissans was Rick Kelly in 9th, one place ahead of his brother Todd.

After the race, Whincup said his mindset was “to finish in the top 18 tomorrow. But the safest place to be is up the front, away from all the carnage.”