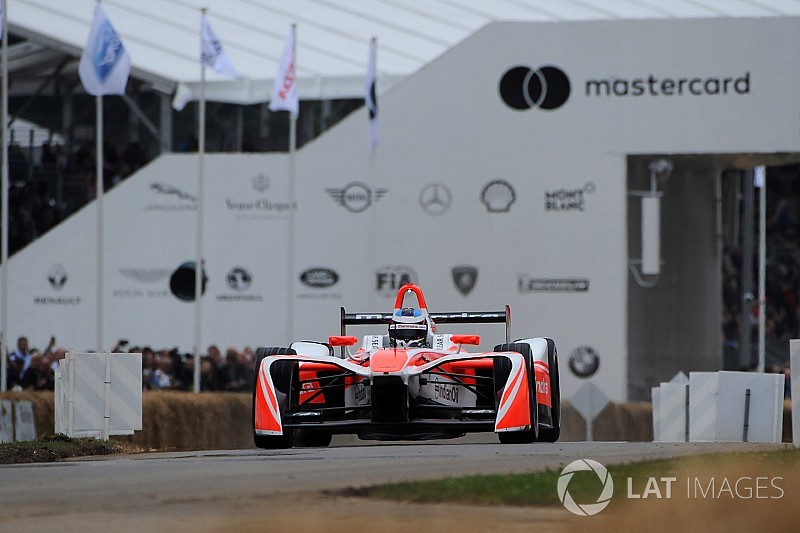 Mahindra Racing has broken the lap record for an electric open-wheel car at the Goodwood Festival of Speed.

The German driver improved by a mammoth eight seconds over the course of the four-day event, ending just 1.2s shy off the outright electric vehicle record set in an 850bhp Lola-Drayson B12 69/EV.

Heidfeld already holds the overall lap record in the 1.86 km hill climb, having set a time of 41.6s back in 1999 in the F1 championship-winning McLaren MP4/13.

“It was great fun to drive up the hill with the target of setting a new electric single-seater record, which we managed to do – but I think we have to come back to challenge the outright electric record!,” Heidfeld said.

“It’s positive to see that next season’s drivetrain, which we showed here for the first time, ran problem-free. We haven’t had many tests with it before so, all-in-all, it was a very good, productive and fun weekend.”

Mahindra’s latest challenger also competed in the final shootout against a field of 42 cars, which included the Le Mans-winning Aston Martin, with Heidfeld performing creditably to set the fifth fastest time of all.

“Not only have we unveiled the M4Electro to the public, but we have also challenged the sceptic’s view of electric vehicles being neither fast nor exciting

“To showcase the latest Mahindra Racing technology to such an incredible audience, both at Goodwood itself and through the online and social media coverage, was special.

“To then set a new open-wheel eRecord was the perfect conclusion to a wonderful event.”

Gallery: Best photos from the Goodwood Festival of Speed