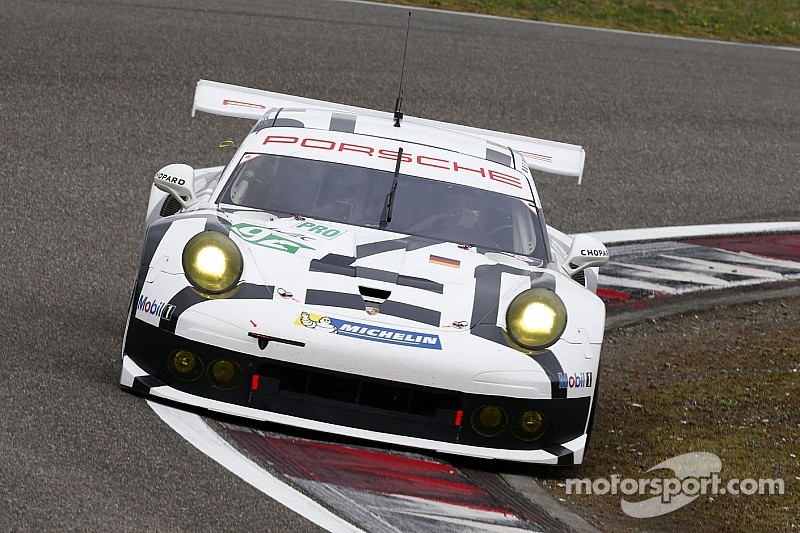 Stuttgart. The six-hour race on the Bahrain International Circuit on 15 November heralds the decisive phase of the Sports Car World Endurance Championship WEC.

The penultimate round in the Kingdom on the Persian Gulf takes off during the day in temperatures of around 35 degrees Celsius and ends after dusk. This throws special challenges at drivers and teams.

A week ago in Shanghai, the Porsche Manthey squad celebrated a commanding double victory in the fiercely-contested GTE-Pro class in the fight for the World Cup, and will again field two Porsche 911 RSR in Bahrain. After clinching success in China, the title is now again within striking distance.

The 470 hp Porsche 911 RSR campaigned in the Sports Car World Endurance Championship is based on the seventh generation of the iconic 911 sports car. Shortly after its race debut in 2013, the car scored an emphatic double victory at the 24 Hours of Le Mans. For 2014, the vehicle received improvements in many areas. The 911 RSR kicked off the season with victories at the long distance classics of Daytona and Sebring in the USA, before going on to win the WEC races at Silverstone and Shanghai.

The six-hour race on the Bahrain International Circuit takes off on 15 November at 15.00 hrs local time (13.00 hrs CET). TV station Eurosport airs the last two hours of the race live from 17.00 hrs CET.

Dr. Frank-Steffen Walliser, Porsche Head of Motorsport: “After the double victory in Shanghai we’re heading to the last two races of the season full of confidence. We’ve made up ground in the fight for the World Cup and now we are back in the running. Bahrain is a circuit that suits us and as always the team and drivers are highly motivated. Fans will be treated quite literally to a heated battle.”

Marco Ujhasi, Project Manager 911 RSR: “The characteristics of the Bahrain track are very demanding on the brakes. The high temperatures affect the tyres, so first of all we have to try to get to grips with tyre wear. After last year’s race in Bahrain we conducted tests and gathered a lot of data. This should help us find a good set-up for the start. After that we just have to keep working step-by-step.”

Jörg Bergmeister (Porsche 911 RSR #91): “I wouldn’t exactly call the Bahrain International Circuit my favourite track but I’m still looking forward to the race. We tested there after the final round of the 2013 season, so we should be reasonably sorted out for our return. I’m hoping the team can carry the momentum of our one-two result from Shanghai to Bahrain.

Richard Lietz (Porsche 911 RSR #91): “I’m particularly looking forward to this race. The weather is normally really good and the track suits us. Last year we competed there for the first time with the new evolutionary stage of the 911 RSR and were fast right off the bat. I hope we can continue on from where we left off in Shanghai and that Porsche makes more headway in the manufacturers’ classification.”

Frédéric Makowiecki (Porsche 911 RSR #92): “In Shanghai we saw that when everything’s perfect we can win races. We performed strongly in Bahrain last year. It’s ideal for us that we compete in daylight and in the dark. We have to keep Ferrari under pressure in the fight for manufacturers’ title right to the last race and I hope that we can make up ground with more points in Bahrain. In any case I’m feeling very confident.”

Patrick Pilet (Porsche 911 RSR #92): “We tested after last year’s race in Bahrain so we know what to expect. With the new aerokit for the 911 RSR we were strong in the race back then and we now have to do everything to continue on this path. The circuit suits us, although it’s really aggressive on the rear tyres. For this reason we have to find an optimal set-up. If we can manage this then I think we have a chance to win in Bahrain.”

Project Brabham: A more sustainable way for a team to survive?