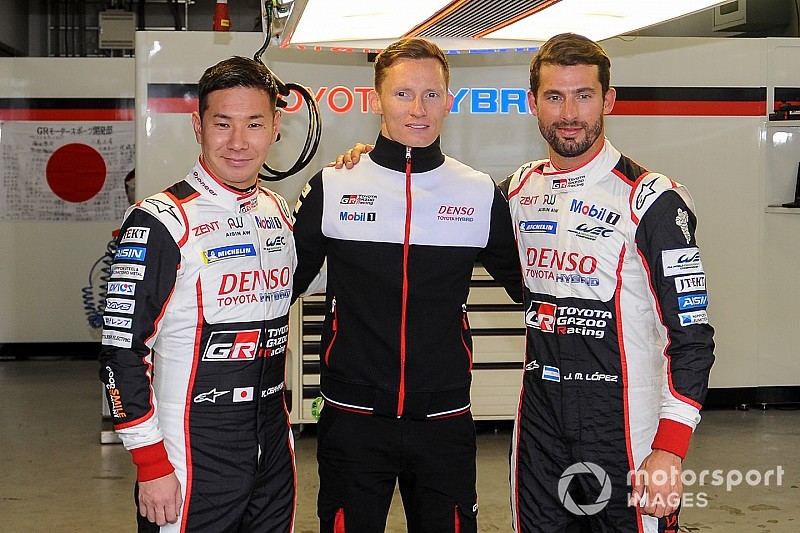 Kobayashi then went quickest during the second runs with a 1m23.678s, which fell six thousandths short of ousting the sister car from pole.

But when Buemi lost his 1m23.900s to a track limits infringement and could only follow it up with a 1m24.094s, his and Alonso's average dropped below that of their teammates.

Lopez said: "My lap was okay. I didn't have maximum confidence, but I new I was close enough for Kamui to do his job because he is always quick around here."

The two Rebellion-Gibson R-13 LMP1s both ended up with a second of the Toyota TS050s following the latest Equivalence of Technology changes made in the lead-up to and during the event.

Andre Lotterer's best lap in the #1 Rebellion Racing entry was only eight tenths off Alonso's pace. He and teammate Neel Jani ended up a similar margin off the pole with a 1m24.359s average.

That put them just under two tenths up on the 1m24.533s average of the second Rebellion qualified by Gustavo Menezes and Thomas Laurent.

Jenson Button just pipped Stephane Sarrazin on the first runs, but Egor Orudzhev then went a second quicker than Vitaly Petrov to reverse the positions of the two BR1s in the final qualifying order.

That was enough to give them a 1m28.906s average and a half second advantage over the #37 Jackie Chan DC Racing Oreca qualified by Jazeman Jaafar and Nabil Jeffri.

The second of the Dunlop-shod DCR Orecas qualified third in the hands of Stephane Richelmi and Gabriel Aubry.

Thiim topped the times after the first runs with a session-best 1m35.884s, before Sorensen followed it up with a 1m36.302s.

That gave the Danish duo an 1m36.093s average, which gave them the pole by nearly two tenths from the MTEK BMW M8 GTE shared by Tom Blomqvist and Antonio Felix da Costa.

Alex Lynn and Maxime Martin in the second Aston were a further tenth back in 1m36.362s.

Andy Priaulx and Harry Tincknell took fourth in the best of the Ganassi-run Ford GTs with a 1m36.453s average.

Top Ferrari drivers were Davide Rigon and Sam Bird in fifth with a 1m35.584s average, while the fastest Porsche drivers were Gianmaria Bruni and Richard Lietz in eighth.