Today marked the debut of the FIA World Endurance Championship in Brazil for the 6 Hours of Sao Paulo event. Alex Wurz and Nicolas Lapierre set the early fastest lap on the Autodromo José Carlos Pace circuit to top the time sheets with a 1:23.272 in their #7 Toyota TS030 – Hybrid. Second and third top times for the LMP1 teams were the two Audis.

“It was an interesting day,” said Wurz. “Of course, it is nice for the team to be the fastest at the end of the day for the first time but this is practice, not the race. We have a lot of data to analyse to make some set-up changes. The car feels good but we can optimize it; here we always have to find a good compromise and it needs to work on both the aerodynamic and mechanical sides.” 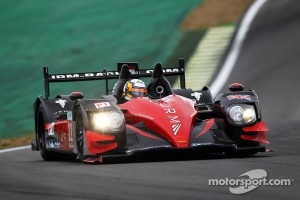 Lapierre commented, “I drove the most in the first free practice because I had to learn the track; it wasn’t easy due to the drizzle and then more heavy rain. Anyway, the two sessions were good. Interlagos is a nice track, with beautiful curves and a lot of undulation.”

The day started with overcast skies before the rain which caused a few exciting moments for the drivers; many who had never turned a lap on the famous Interlagos track. Second fastest was the #2 Audi R18 ultra driven by Tom Kristensen, Allan McNish and Lucas Di Grassi ; just over four tenths off the pace. A further two-tenths back was the #1 Audi R18 e-tron. Actually Andre Lotterer, Benoit Tréluyer and Marcel Fässler were fastest on the wet circuit; yet the trio ended third at the end of the second free practice.

Fastest for the LMP1 privateer team were teammates David Brabham, Karun Chandhok and Peter Dumbreck for the #22 JRM HPD ARX-03 Honda. The trio was less than one second off the pace of Toyota but just three tenths of a second to the #1 Audi.

“After a long time away it was good to come back to Interlagos and drive the circuit again. It’s genuinely a very cool track,” Brabham said. “Balance wise we are getting there and we made some good improvements throughout both sessions. I think we can be somewhat pleased with what we have achieved today.”

In LMP2, the two Signatech Nissan Orecas were first and second in practice. The #23 with drivers JordanTresson, Franck Mailleux and Olivier Lombard was just 0.003 seconds faster than the #26 of Pierre Ragues, Nelson Panciatici and Roman Rusinov. Starworks Motorsports #44 with Ryan Dalziel, Stephane Sarrazin and Enzo Potolicchio were third fastest the class. 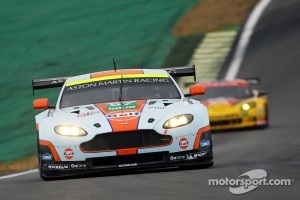 In the LMGTE-Pro class, the #97 Aston Martin Racing Vantage V8 with drivers Darren Turner and Stefan Mucke, ended up with the fastest lap by four-tenths of a second. Second went to the early pace setters, Team Felbermeyr-Proton. Marc Lieb and Richard Lietz kept their #77 Porsche on top until the final minutes. AF Corse #51 Ferrari F458 Italia ended up third today with drivers Giancarlo Fisichella and Gianmaria Bruni.

Larbre Competition set the fast lap for the LMGTE-Am class. Drivers Fernando Rees, Julien Canal and Patrick Bornhauser were the star of the class today in their #50 Corvette. They outclassed their competition by more than one second! Second fastest was the #88 Felbermayr-Proton Porsche of Paolo Ruberti, Gianluca Roda and Christian Ried.

The WEC teams will have one final practice prior to qualifying tomorrow.