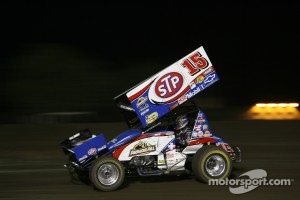 “This season has been one of the most rewarding ones of my career,” said Schatz, whose four previous WoO titles came in 2006, 2007, 2008 and 2009. “Everyone at Tony Stewart Racing should be proud of what we accomplished. From all the guys on the team, our teammates both in the Outlaws and USAC Series to our marketing partners – STP, Armor All, Chevrolet – our motor builder Ron Shaver, J&J Auto Racing, who builds our cars… I could go on and on. The key was sticking together through the tough times. We were all in this together and now we can celebrate as one.”

Heading into Friday night’s event, Schatz carried a 175-point advantage over his nearest challenger, Craig Dollansky. After qualifying the TSR No. 15 STP/Armor All/Chevrolet J&J in the 25th position, Schatz raced to a sixth-place finish in the fifth heat, and his sixth-place finish in the B-Feature was enough to put Schatz’s name in the record books as the 2012 WoO champion.

Despite his quick start to the 2012 season that began with a pair of wins in the first seven races, Schatz struggled with consistency in qualifying during the first half of the season and, on most nights, found himself charging from the back of the field. After making some adjustments to the STP racing machine and getting a little motivation from team owner Tony Stewart, Schatz turned the corner in late July. The championship charge started with a victory July 29 at Cornwall (Ontario) Motor Speedway and, from there, Schatz never looked back. In the final 29 races Schatz won nine times, finished second nine times and posted 25 top-five finishes en route to the WoO title.

“There were some moments this season when I was wondering if winning the championship would even be possible,” said the 35-year-old Schatz, who resides in Fargo, N.D. “At one point, I remember saying I felt like I was looking up from rock bottom. We got things turned around. Our communication got better. Tony helped us both on the track and with our communication as a team. Coming from where we were earlier in the year to having the success we’ve had since late July, that’s probably what makes this championship feel like a huge accomplishment.” 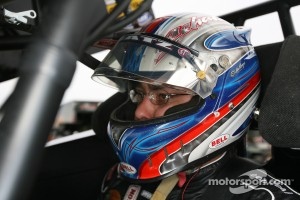 With the title clinched, Schatz looks to end the season with one more victory in Saturday night’s WoO season finale.

“There’s nothing quite like winning that final race,” Schatz said. “I’ve been fortunate to do it a few times (1999, 2004, 2006, 2008 and 2011). Knowing the championship is officially ours really lets us focus on just winning another race. There is a lot of pride on this team and our success rate in Charlotte is something we’re all pretty proud of.”

The 2012 season has been another highlight reel for Schatz and the STP team. The championship title puts an exclamation point on a year that included 11 WoO A-Feature wins, the 2012 Knoxville (Iowa) Nationals title – which was his sixth Knoxville crown – and his fifth Williams Grove (Pa.) National Open victory. Over the course of the season, Schatz earned 41 top-five finishes and 61 top-10s in 74 starts.

“This season was a special one seeing Donny and the team climb back to the top of the mountain,” said Stewart, the three-time and reigning Sprint Cup champion who has earned a total of 16 owner championships in the WoO and USAC series since 2001. “Coming in second the past couple of seasons was tough on them. Even earlier in the year, they were still trying to find their way. Seeing them put it together during the toughest part of the year and just running away with it at the end was pretty impressive. Donny is a true champion, and it says a lot about the entire TSR operation. They never lost sight of what their ultimate goal was. Everyone did an outstanding job in bringing TSR this championship.

“It’s exciting to win another championship with our partners Armored Auto Group and their STP and Armor All brands. Their commitment to TSR has been a true asset to our organization. Also, being able to deliver another championship to Chevrolet is a big deal for all of us. We’ve been able to win them three World of Outlaws championships and we’re excited about trying to deliver another one next year. Their effort and dedication to help TSR move forward with our USAC and World of Outlaws teams has directly resulted in us having success on the track.”