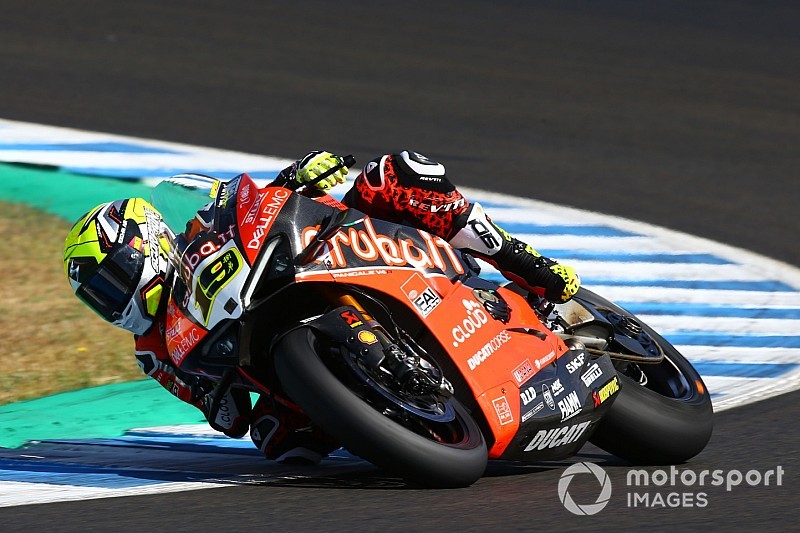 Ducati's Alvaro Bautista was the fastest man on the opening day of World Superbike running at Jerez as Loris Baz's and the Ten Kate team's return to the series began with a huge crash for the Frenchman.

Bautista's closest rival throughout the day was Yamaha's Michael van der Mark, who beat him to FP1 honours with a late flyer.

Bautista was second in that session despite leading most of it and the Spaniard also controlled the proceedings in FP2 before yet another lap from van der Mark.

But Bautista also improved this time around with a 1m39.428s, the best time of the weekend so far.

The Dutchman's teammate Alex Lowes was fourth and none of the two Pata Yamaha riders improved on their times in FP2 as Tom Sykes rounded out the top five.

GRT Yamaha duo Marco Melandri and Sandro Cortese were sixth and seventh respectively, the former rebounding from an FP2 crash.

Michael Ruben Rinaldi was the closest Ducati to Bautista in eighth, over eight tenths off the pace, followed by Kawasaki duo Leon Haslam and Toprak Razgatlioglu (Puccetti) as Chaz Davies was only 11th.

Baz, who is making his return to the series alongside Ten Kate with a Yamaha, had a crash at Turn 4 in FP2, which sent his bike airborne but with the Frenchman escaping any serious injuries.

Yuki Takahashi and British Superbike star Tommy Bridewell, who are filling in for the injured Leon Camier and Eugene Laverty, were 19th and 20th respectively.

Bautista was hampered by fractured vertebra at Imola