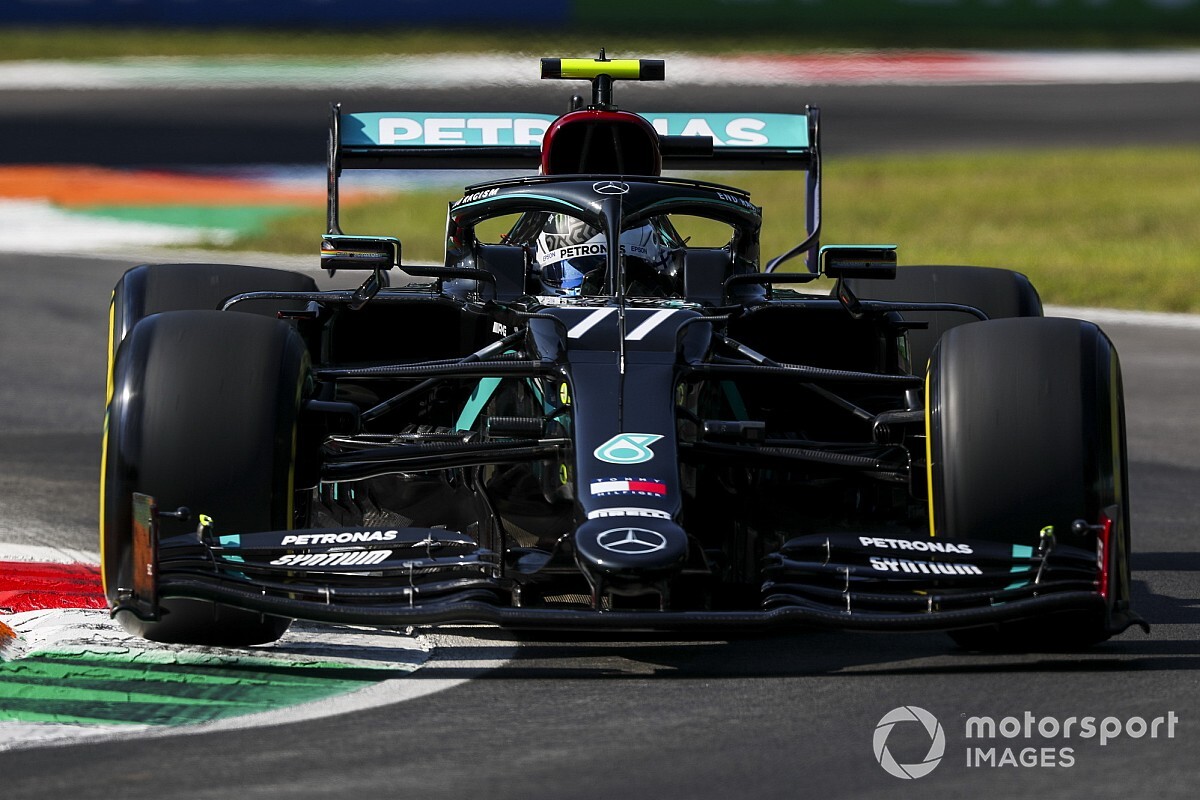 After losing more ground on Lewis Hamilton in the title battle last weekend at Spa, Bottas was able to enjoy the upper-hand on his Mercedes teammate throughout first practice at Monza.

Bottas recorded the fastest time during their initial runs on the medium compound tyre, sitting 0.019 seconds clear of Hamilton before the session was suspended due to a crash for Verstappen.

Verstappen lost control of his car midway through the Ascari chicane, causing him to spin into the wall at the exit of the corner and bring out a red flag.

The Red Bull driver reported after the crash that he was unsure if the car had been damaged, but was able to get out of the gravel and return to the pits, albeit with his front wing missing.

Red Bull set to work on repairing the damage to Verstappen's RB16 under the red flag, and was able to get the Dutchman back out just 20 minutes after he had arrived in the pits.

The track was also cleared of debris in swift fashion, allowing the session to quickly resume and for the majority of the teams to turn their attention to soft-tyre running.

Bottas was able to post a best lap of 1m20.703s on the soft runs to pip Hamilton to top spot by two-tenths of a second, as the Mercedes finished over half a second clear of the rest of the field.

Alexander Albon led Red Bull's charge with a run to third place, but was almost eight-tenths of a second slower than Bottas' fastest time.

Daniil Kvyat fared well for AlphaTauri, splitting the Red Bull drivers by finishing the session in fourth place, and set his best lap on the medium compound tyre.

Verstappen recovered from his spin to end the session fifth, narrowly beating former Red Bull teammate and current AlphaTauri driver Pierre Gasly, who finished sixth-fastest on mediums despite a late spin at the exit of the Roggia chicane.

Sergio Perez took seventh for Racing Point, setting an identical lap time to McLaren's Lando Norris but gaining the position in the classification by virtue of setting his lap earlier in the session.

Renault struggled to repeat the mighty straight-line pace that served it so well at Spa as Daniel Ricciardo could only finish ninth-fastest, with teammate Esteban Ocon ending the session down in 12th.

Carlos Sainz completed the top 10 for McLaren ahead of Charles Leclerc, who was the leading Ferrari-powered driver in 11th, 1.2 seconds off Bottas' headline time.

Leclerc's Ferrari teammate Sebastian Vettel finished the session a lowly 19th, 2.2 seconds down on the Mercedes at the front.

Lance Stroll wound up 13th in the second Racing Point car, and was one of a number of drivers to report concerns about cars moving slowly on the racing line in a bid to find space and get a tow.

Haas drivers Romain Grosjean and Kevin Magnussen took 14th and 15th respectively ahead of the Alfa Romeos of Antonio Giovinazzi and Kimi Raikkonen. Magnussen's session came to an early end after Haas detected a cooling issue on his car that required investigating.

Roy Nissany enjoyed his latest F1 practice appearance for Williams in place of George Russell, and was able to lap quicker than both Vettel and Nicholas Latifi in the sister Williams car, finishing 18th.

Latifi propped up the running order in 20th, finishing three tenths of a second down on Nissany's best laptime.