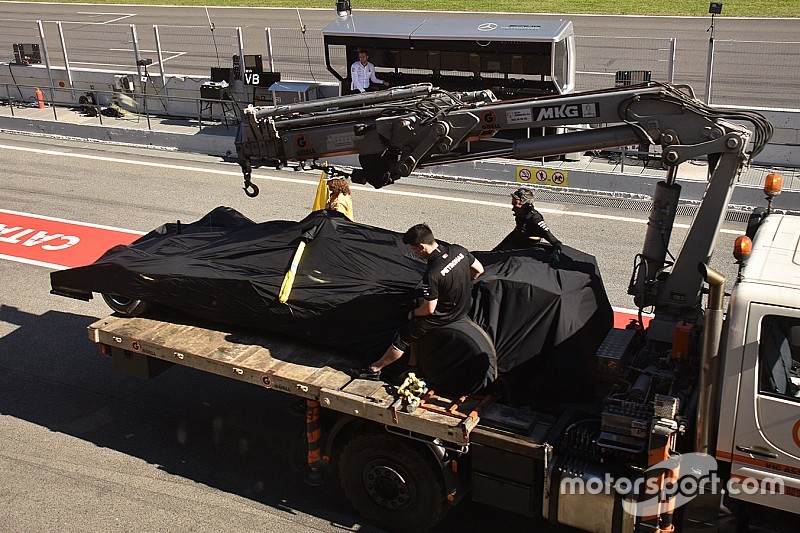 F1's champion squad arrived at the final week of pre-season running with substantial revisions to its W10 design.

Lewis Hamilton covered 83 laps in the morning, but when Valtteri Bottas took over for the afternoon session the car stopped on its out-lap. Mercedes undertook a rapid precautionary engine change in response to the oil pressure problem it had suffered, but Bottas only had time for seven more laps at the end of the day.

Technical director James Allison revealed that the package Mercedes had introduced was its intended Australian Grand Prix specification, and different enough from the week one version that the loss of mileage was a problem.

“It was not exactly the day we hoped for, running for the first time with the bodywork kit that we expect to use in Melbourne, with a large part of the day lost to an oil pressure issue at lunchtime,” said Allison. “Nevertheless, either side of that problem we did do some useful things, finding that the car behaves a little differently with the new package.

“We're looking forward very much to having a trouble-free day tomorrow to get a better feel for what it can do.”

Hamilton described the revised Mercedes as “feeling relatively good” and “an improvement from last week, which is a good step”.

Bottas underlined that the car had provided “four days of flawless reliability last week” before Tuesday's problem and praised Mercedes for its quick engine change.

“The team did a really good job to get the car out again; it was important to get a bit of a feel for the new aero package,” he said. “My running was obviously very limited, but it seems like we've made improvements.”

Ferrari said Leclerc's long absence from the track was “because some checks were required on the SF90's cooling system”.

The car ran smoothly when Sebastian Vettel took over for the afternoon, allowing the German to cover 81 laps.

“We did fewer laps than planned, but I’m sure we can make up for lost work in the coming days,” said Leclerc.