Williams will be on hand in Jerez for the preseason testing.

Jan.14 (GMM) Williams has become the latest team to confirm it will be on track as crucial preparations for the 2014 season begin in two weeks at Jerez.

"We'll be on track in Jerez," the Oxfordshire based team Tweeted, "and everyone is looking forward to getting going now!"

Williams added that the first all-new FW36, to be powered by a turbo Mercedes V6, is currently being put together at the Grove factory this week.

Williams' news has left heads scratching, after Lotus boss Eric Boullier claimed he knew as "fact" that more than one team will be sitting out Jerez. 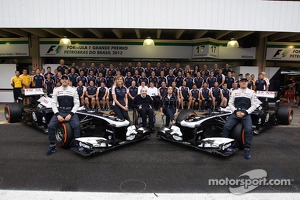 But numerous international reports have claimed that midfield teams including Force India, Sauber, Toro Rosso and even Caterham are all planning ahead for the first of just three winter tests.

So far, Marussia is the only team that has sent out signals that it is not fully committed for Jerez, and like Lotus it has only a conditional place on the 2014 entry list.

But team president Graeme Lowdon told Reuters there is no cause for concern.

"We're just finalising administrative details with the FIA and we have absolutely no concerns at all that the entry won't be confirmed," the Marussia chief said.

It is believed both Lotus and Marussia have missed the initial deadline for paying the 2014 entry fee to the governing FIA.

A list published by Brazil's Totalrace shows that financially-struggling Lotus' fee amounts to a whopping $2.1 million, almost double that of grandee McLaren's $1.1m.

Marussia, however, only has to pay the basic fee, having not scored a point in 2013.

Lowdon sounded hopeful the 2014 car will be ready for Jerez.

"Testing time in Formula One is incredibly limited," he told Britain's Sky, "so if it (the new car) is there and you can use it, you want to use it."

Departing Valsecchi not paid by Lotus in 2013

Bottas: Turkey win one of my "best ever" F1 races