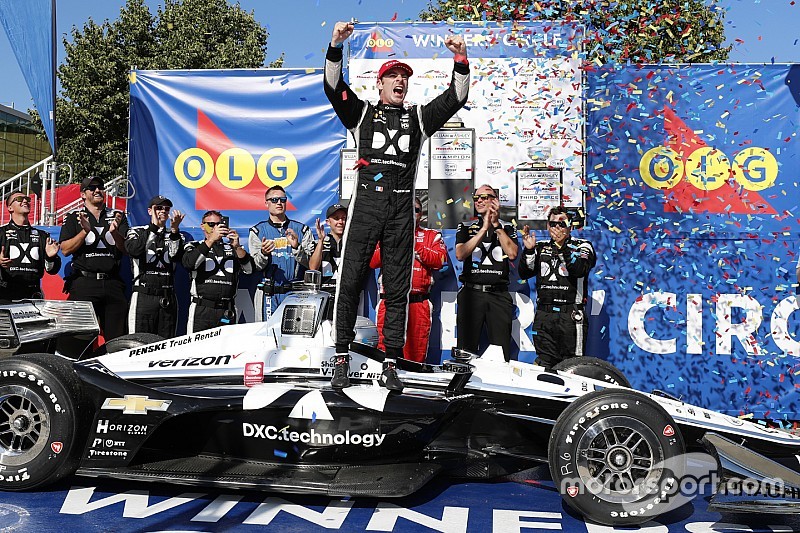 Team Penske-Chevrolet’s Simon Pagenaud withstood late-race pressure from defending Toronto winner Scott Dixon to launch himself back into the championship hunt, as Alexander Rossi edged closer to points leader Josef Newgarden by beating him to third.

After a fast lap by Robert Wickens in the Arrow-modified hand-controlled Acura NSX, and Helio Castroneves then leading the pack in the IndyCar two-seater, Simon Pagenaud’s Team Penske-Chevrolet and Scott Dixon’s Chip Ganassi Racing-Honda led the field to the green flag.

The polesitter just about held off the five-time champion, but Dixon then had to fend off an outside attack from Alexander Rossi into Turn 3. The Andretti Autosport driver had already demoted the other Ganassi car of Felix Rosenqvist, while Ed Jones had moved his Ed Carpenter Racing-Chevy ahead of the second Penske of Josef Newgarden. Sebastien Bourdais (Dale Coyne Racing with Vasser-Sullivan) and Takuma Sato (Rahal Letterman Lanigan Racing) ran seventh and eighth.

Further back however, 15th-placed starter Will Power tried to go down the inside of the other RLLR car of Graham Rahal at Turn 8 as Rahal was simultaneously looking down the inside of Marco Andretti. The collision was inevitable and it sent Power, Rahal and the following innocent Ryan Hunter-Reay to the pits without losing a lap but Marcus Ericsson’s issue looked terminal in the Arrow Schmidt Peterson Motorsports-Honda. Meanwhile Andretti, who had been nudged into a 360degree spin continued after losing only two places.

When the race resumed, Jones dived down the inside of Rosenqvist to take fourth, while Spencer Pigot in the second ECR-Chevy and Andretti demoted Colton Herta’s Harding Steinbrenner Racing-Honda to 12th. Two laps later, Herta was back past Andretti.

Hunter-Reay on Lap 11 lost places to Santino Ferrucci and Rahal and came under attack from Power, but then made his way past Tony Kanaan’s AJ Foyt Racing-Chevy as those who started on alternate compound tires started to look sketchy and started pitting on Lap 15, the first of these being Rossi.

Out front Pagenaud had no tire problems, pulling a five second lead over Dixon, before the pair of them finally pitted at the end of Lap 17. That left the primary-tired Andretti Autosport-Honda of Zach Veach out front temporarily while Pagenaud resumed in second with other primary compound runners Ferrucci, Rahal and Hunter-Reay in third, fourth and fifth as a buffer between himself Dixon.

Pagenaud then passed Veach for the lead on Lap 23, while Dixon, Rossi, Newgarden, Sato and Rosenqvist remained bottled up behind Veach, Ferrucci, Rahal and Hunter-Reay.

Veach and teammate RHR stopped on Lap 31, Rahal went one lap longer and Ferrucci went two laps longer. With the off-sequence cars out of the way, Dixon’s deficit to Pagenaud was just under six seconds, his lead over Rossi 1.9sec, and now Newgarden and Sato and Bourdais started applying the pressure to Rossi.

Every time Dixon tried to close in on Pagenaud, the Frenchman had an answer and approaching Lap 50 of the 85, he had eked his lead out to seven seconds. Dixon, mean time, had no apparent problems pulling away from Rossi who had Newgarden and Sato filling his mirrors. Rossi was again the first of the frontrunners to stop on Lap 49, with James Hinchcliffe pitting his Arrow Schmidt Peterson Motorsport-Honda from eighth and Power from 10th.

Rather than risk losing out due to an untimely yellow, Pagenaud, Dixon, Newgarden, Sato and Bourdais responded by all pitting on Lap 51. Once the off-sequence cars had stopped and gotten out of the way, Pagenaud was left 5.2sec ahead of Dixon who had a similar margin over Rossi who in this final stint was running 3.5 seconds ahead of the Newgarden vs Sato battle.

However, Dixon slashed into Pagenaud’s lead as the leader encountered traffic, in particular struggling to get around Kanaan, but Dixon lost time behind TK too. Once the Ganassi car was ahead of the backmarker, the gap was 1.5sec, but then Pagenaud got stuck behind Hunter-Reay because he was also trying to juggle brake temperatures along with fuel mileage and use his push-to-pass.

With 17 laps to go, Bourdais slithered into the Turn 3 tire wall but was able to resume in ninth, just ahead of Power. That became eighth when Sato’s engine blew.

When Hunter-Reay pitted for a splash and dash, Pagenaud eased away from Dixon a little but then got stuck behind a battle between Veach and the Carlin-Chevy of Max Chilton. Pagenaud went past Chilton with four laps to go but Dixon got caught behind him, giving Simon vital breathing room, and the Penske driver then got around Jones too.

What put the result beyond doubt, however, was teammate Power – who had recently lost ninth place to Rahal – sliding into the Turn 8 tire barrier, forcing IndyCar to finish the race under yellow and dropping Power to 18th.

Rossi took third, while Newgarden survived a late race thump of the Turn 11 wall to claim fourth ahead of Rosenqvist, Hinchcliffe and Herta.