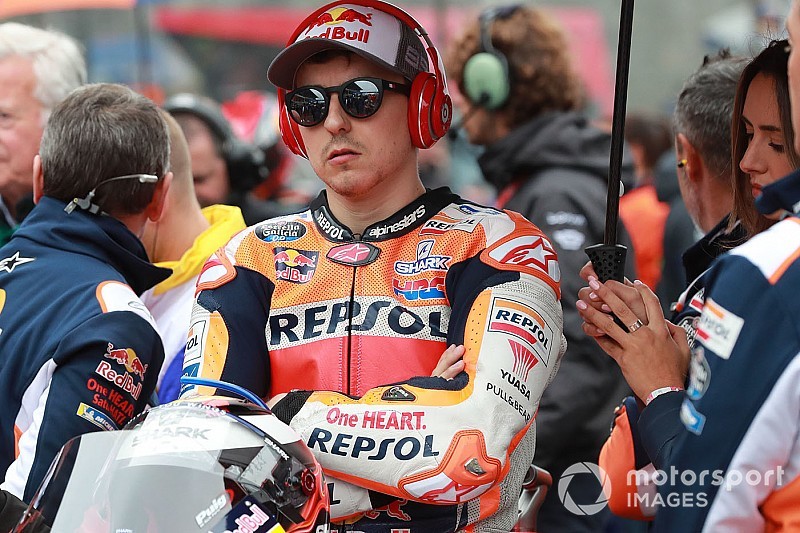 Jorge Lorenzo says that dealing with his MotoGP struggles at Honda is more difficult compared to his time at Ducati, and that he is finding it "very tough" to consistently finish outside the top 10.

Lorenzo has yet to finish in the top 10 this year, with his 11th place at Le Mans standing as his strongest result of 2019 so far.

While the start to his Honda tenure was hindered by spending most of the second part of 2018 injured and also missing some of this year's pre-season testing, Lorenzo admitted that it's "very tough" to be so low in the order.

He added that he is finding it harder with Honda than he did at Ducati, where he also suffered a tough first season in 2017 albeit ending up with three podium finishes.

"It's very tough, when you have won so many world titles, victories, when you are used to it, is very tough to be so far from the winner and more down than 10th place," said the three-time premier class champion.

"Very tough. Was tough in Ducati and now it's probably a little bit tougher.

Lorenzo said that he's been only able to make small steps in the past couple of rounds at Jerez and Le Mans, and it's "difficult to imagine" that he could fight for the win at Mugello either.

"I think after Jerez test [we] make a step in some parts of the bike. In Le Mans I make another step in some little parts and also my riding style.

"Unfortunately very small steps, to be able to fight for something big, a victory or podium.

"Difficult to imagine that Sunday I will try for the victory. But my goal now is to make another step."

Lorenzo added that he's been able to pinpoint entry of the corners and braking as the main areas he needs to work on.

"I need to modify some part of my riding to be able to enter faster the corners and it is my goal this weekend.

"Hopefully the bike is gonna work well and we can have a better weekend compared to the previous five races.

"It's very tough at this moment to change the bike and I think especially in the entry of the corner I need to modify it a lot.

"Apart from it, now I feel quite well, or much better, on the bike in the ergonomy area, that is a good sign.

"Now I have to work a little bit in my riding style especially on braking and entry of the corners."

Zarco: KTM situation "like the Stoner times" at Ducati