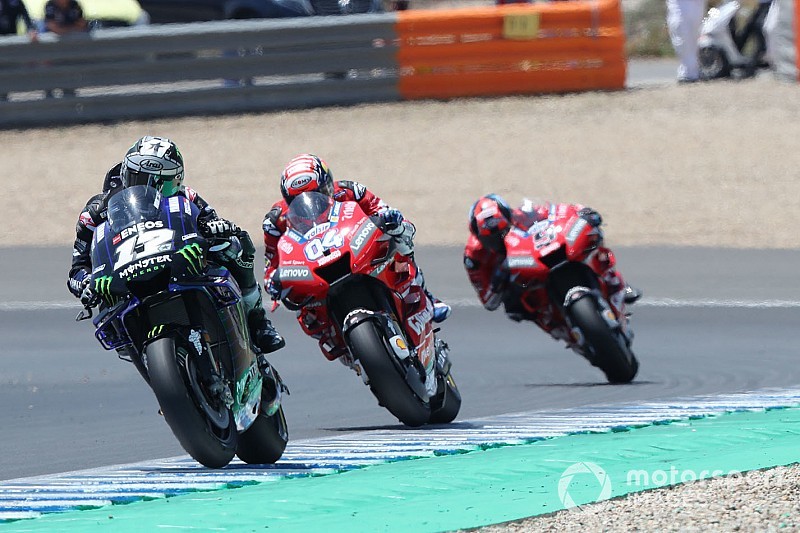 Yamaha MotoGP rider Maverick Vinales says his Jerez podium, which felt “like a victory”, was all down to a rare strong start.

The Spanish GP marked the first race in 2019 – and only the third race since the start of last year – that Vinales gained a position on the opening lap, the Spaniard going from fifth to fourth.

Aided by a mechanical failure for Fabio Quartararo up ahead, Vinales held off Ducati's Andrea Dovizioso and Danilo Petrucci to record his best-ever finish at Jerez in the premier class.

“Actually I think the result is about the start, we did many mistakes in the previous races where I felt even more great than here in Jerez,” Vinales said.

“Being here on the podium in Jerez for me feels even like a victory because it's a track I really struggle, for me it's one of the worst on the calendar, so it was very important to stay in front of the Ducatis, because also they were pushing so much at the end of the race.”

Vinales said his crew had been focusing intensely on the start and the first laps of the race, but also stressed he had already managed a decent getaway in Austin only for it to be undone by a jump-start penalty.

“We work a lot on the start this weekend, trying to find a method to be more consistent on the start and finally I think we found," he said.

“Also in Austin I started good – I just moved in the last second because of the engagement on the clutch, and was a shame because on that race I felt very good.”

Vinales, whose Jerez podium more than doubled his points tally for 2019 so far, said he was still chasing gains on traction, and lamented that the post-Jerez test would take place on a grippier surface than the race weekend – as this will make improvements harder to come by.

He also noted that his poor starts in previous races have served to conceal his current potential with the Yamaha bike.

“The first two races, our result, it's been really difficult and out about the start, honestly," said Vinales. "Because the potential we had was much more for what we was doing.

“But anyway Jerez I didn't expect to be on the podium, it's a track I really struggle all the years I've been.

“Yamaha is doing a great job but still there is a lot to improve. I still have to understand the bike, I'm riding quite aggressive on the bike, stop-and-go, maybe it's not the best riding style for the bike, so I also have to improve, not only the bike.”