As a new NASCAR Sprint Cup Series champion celebrated on the frontstretch of Homestead-Miami Speedway, Tony Stewart pulled his No. 14 Office Depot/Mobil 1 Chevrolet into the garage area after finishing 17th in the season-ending Ford EcoBoost 400.

Stewart, the 2011 Sprint Cup champion, fought an ill-handling racecar throughout the 267-lap race Sunday around the 1.5-mile oval, yet still rallied to a top-20 finish after starting 35th. It was an inauspicious result in Stewart’s milestone 500th career Sprint Cup start. 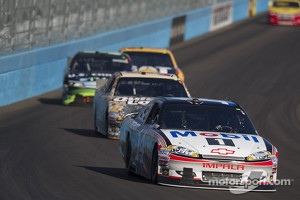 “We just never got the balance of the car right,” said Stewart, who typically performs much better at Homestead, as his three Sprint Cup wins attest (1999, 2000 and 2011). “Loose on exit. Tight in the center. That was the story of our day.”

Constant adjusting of the No. 14 Office Depot/Mobil 1 Chevrolet via track bar, wedge, tire pressure and even the addition of a spring rubber to the left-rear during a lap-158 pit stop was the story of Stewart’s day.

But the biggest story was the championship battle between Brad Keselowski and Jimmie Johnson, the only two drivers still vying for the title. They came into Homestead separated by 20 points.

Their championship bout was neck-and-neck until Johnson had to make a second pit stop for a loose lugnut with less than 50 laps remaining.

But the ultimate end of Johnson’s championship hopes came via a gear failure that dispatched Johnson to the garage on lap 227. The championship was Keselowski’s.

“Congratulations to Brad and Roger Penske and everyone at Penske Racing,” Stewart said. “We know how hard it is to win a championship, and they earned this one.”

Ryan Newman, driver of the No. 39 U.S. Army Chevrolet for SHR, finished third. It was his six top-five finish of 2012 and his first top-five in 11 career Sprint Cup starts at Homestead.

Newman’s previous best finish at Homestead was sixth in 2002, one of four top-10 finishes he has at the South Florida track.

“He deserves this probably as much as anybody else, if not more because of what he’s done for motor racing in general,” said Newman of his former boss, Roger Penske, after the racing magnate won his first Sprint Cup title as a car owner.

“His dedication to all forms of racecars is probably more than anybody else in the history of auto racing. I know this is probably one of the sweetest moments in his racing career.”

Jeff Gordon won the Ford EcoBoost 400 to score his 87th career Sprint Cup victory, his second of the season and his first at Homestead. With the victory, Kentucky Speedway in Sparta is the only venue on the Sprint Cup circuit where Gordon has yet to win.

There were three caution periods for 17 laps, with eight drivers failing to finish.

Stewart represented SHR in this year’s Chase for the NASCAR Sprint Cup and came into the final race of the 10-race Chase in ninth place among the 12 Chase drivers.

He ended the season ninth in the standings. It marked the 13th time in his 14-year Sprint Cup career that Stewart has finished among the top-10 in points. He finished the 2012 season with three wins, a pole, 12 top-fives and 16 top-10s.

“We didn’t have the season we wanted, but we also knew that it would be tough to duplicate the kind of run we had last year,” said Stewart, referring to the championship he and the No. 14 team won last year when they won five of the 10 Chase races.

“A big part of that run was the support of some great partners that had been with Stewart-Haas Racing from the beginning – Office Depot and U.S. Army. We really appreciate all the support they gave us, and we’re proud to represent them.”

Newman finished the year 14th in the standings with 1,051 points, the second-highest non-Chase driver. He capped his season with 14 top-10s.

Bayne pleased with their overall performance at Homestead