Tony Stewart: A match for the masters

Darlington (S.C.) Raceway is one of NASCAR’s oldest venues.

One of the most nostalgic and iconic events in all of sports is taking place this week as golf makes its annual trek to a venue matched in status by the contest it hosts – the Masters at Augusta (Ga.) National Golf Club. Augusta National, designed by golfing legend Bobby Jones in 1932, is one of those rare venues that transcends its sport. The green jacket awarded annually to the Masters winner is one of the most coveted prizes in all of sports.

Matching the historical significance of Augusta National is another iconic venue that lies a mere 145 miles north on Interstate 20, except instead of blooming azaleas lining its confines, a red-and-white checkered wall lines one’s path to glory. 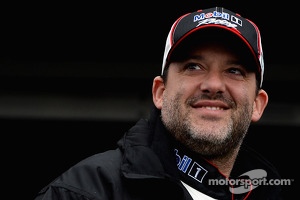 Darlington (S.C.) Raceway is one of NASCAR’s oldest venues. Built in 1949 by Harold Brasington, the 1.366-mile egg-shaped oval has hosted NASCAR Sprint Cup Series races since 1950, and Saturday night will mark the 65th running of the Southern 500 – one of the crown-jewel races on the 36-race Sprint Cup schedule.

Tony Stewart, driver of the No. 14 Bass Pro Shops/Mobil 1 Chevrolet SS for Stewart-Haas Racing, is very much aware of Darlington’s history. The three-time Sprint Cup champion has yet to score a Sprint Cup win at the track aptly known as “Too Tough To Tame”, making it one of only two tracks the Sprint Cup Series visits where Stewart has yet to win – the other being Kentucky Speedway in Sparta, which was only added to the schedule three years ago.

But beyond checking Darlington off his “to-do” list, Stewart knows the track’s history and its list of winners, particularly those who won and set the stage for NASCAR’s rise to mainstream prominence – inaugural Southern 500 winner Johnny Mantz and multi-time Darlington victors David Person, Richard Petty, Cale Yarborough, Bobby Allison, Dale Earnhardt and Jeff Gordon being some of the most notable.

Despite his open-wheel upbringing and Indiana roots, Stewart knows the Southern staple of racing at Darlington and has always approached its races with nothing but the highest regard.

Since becoming a full-time Sprint Cup driver in 1999 where in his first Sprint Cup race at Darlington he finished a respectable sixth, Stewart has posted solid results. In total, he’s made 21 career Sprint Cup starts at Darlington, scoring four top-fives and 11 top-10s. His average finish is 12th and he has finished on the lead lap in all but four of those 21 races, earning him a lap completion rate of 99 percent. And in the last nine Sprint Cup races at Darlington, no driver has completed more green-flag passes than Stewart (563).

While Stewart has been productive at Darlington, that’s not to say he hasn’t endured his share of “Darlington Stripes,” the ubiquitous rite of passage that adorn the right sides of racecars after a too-close encounter with the track’s old school red-and-white striped walls. Darlington’s 23 and 25-degree-banked corners could also be called Amen Corner, for they’ve chewed up and spit out many a competitor.

Currently, the box next to “Southern 500 victory” remains unchecked on what is sure to be a Hall-of-Fame-worthy career, as Stewart’s 48 career Sprint Cup wins attest.

While many a golfing great went winless at the Masters – Greg Norman, Hale Irwin, Lee Trevino, Johnny Miller and Nick Price to name a few – Stewart has no intention of seeing his name absent from Darlington Raceway’s victory scroll. With NASCAR’s annual pilgrimage to its version of Augusta National next up on the Sprint Cup docket, Stewart sees opportunity to add another jewel to his crown.

Why is a win at Darlington a feather in any driver’s cap? “A lot of it has to do with the history of the track. If you can say you won a race at Darlington – that’s a feather in your cap. That’s something to be proud of, knowing that you’re in a group of drivers with names like Pearson and Petty – the pioneers of our sport who you hear stories about the races they ran there and the races they won there.

“Darlington is such a tough track to get a handle on and to be good at all day. You don’t see a lot of guys who have a lot of success there. You see only a handful of guys who religiously run well there. That just shows you how difficult Darlington is to get a handle on. If you can have a good day and win there, it’s a track that’s like winning at Bristol. It’s the same type of feeling – knowing that you conquered something that’s very hard to obtain.”

“Aerodynamics play a role everywhere we go nowadays. Martinsville might be the only track where aerodynamics don’t really play a role anymore. So even at a place like Darlington, you’ve got to make sure you keep the fenders straight because you need every bit of downforce you can get.”

It may not be in Sprint Cup, but you have won at Darlington. Even though it was a NASCAR Nationwide Series race in 2008, how did it feel to finally win there for the first time?

“With the rich heritage and history at Darlington – to win there and be the first guy to win after they resurfaced it – it’s a feeling that’s hard to describe. It’s just cool to win at Darlington. You think back to guys like David Pearson who were so good there. This series is just so deep in history, and this is one of those tracks where the history goes as deep as NASCAR does. To finally get a win at Darlington was a huge honor for me.”

Does that win help in any way for what you want to accomplish when you return for this weekend’s Southern 500? “It doesn’t hurt. Just because you won in a Nationwide Series car doesn’t guarantee success in the Cup car. We still have to go out and do our job with our Bass Pro Shops/Mobil 1 Chevrolet. The cars drive totally different. We’ve got a lot more horsepower with the Cup cars than the Nationwide cars have, so the driving style is different. But still, we had a good run with the Nationwide car and then a good run in the Cup car, and I think that, as much as anything, gives you confidence.”

One of your old USAC T-shirts read “New Blood From an Old School.” In terms of you racing at Darlington, is that a shirt that could be sold again? “I think that shirt would be appropriate at Darlington. Some people aren’t that deep into the history of the sport, but there are a lot of us who do appreciate the past. And I guess for me, being able to race at Darlington is a way of preserving the past.”

Coming from an open-wheel background, was Darlington a place that even open-wheel guys had respect for simply because of the track’s history? “Absolutely. As much as we know about the history of the Indianapolis Motor Speedway, I think people underestimate how much we know about Darlington and the history of that track, and how hard it is to win races there. I guess that’s why a Sprint Cup win at Darlington is something that’s really important to me.”